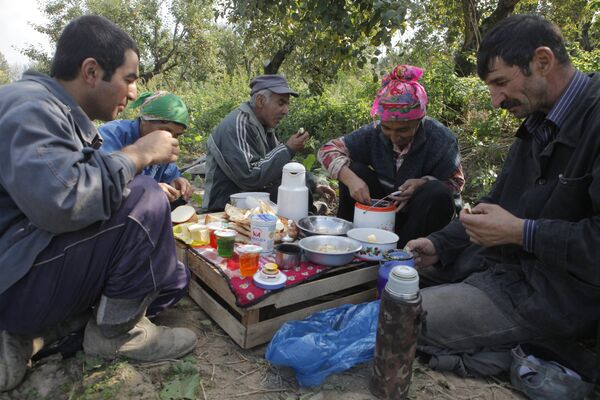 “[Now] the municipal authorities are not entitled to punish, deport, arrest [illegal migrants]. This is the prerogative of the federal center. But we are pushing our colleagues toward tougher measures which correspond to the problem’s urgency,” Sobyanin said in an interview with the Izvestiya daily.

“The city currently has about 300,000 illegal migrants. If we take away crimes committed by visitors, Moscow will become the most law-abiding city in the world,” he said in the interview, to be published Thursday.

He praised the federal authorities’ decision to ban those migrants who fail to properly register from entering the country again.

Russia depends heavily on migrant laborers, mostly from former Soviet republics in Central Asia and the Caucasus, but public opinion about their effects on crime rates and employment opportunities has gotten more negative over the past decade.

The comments by Putin are the latest in a series of remarks by senior Russian officials highlighting the risks of under-regulated migration, and drawing a link between migration and extremism.

A deputy head of the Federal Security Service (FSB), Alexander Roshchupkin, warned on May 30 that illegal migration poses a national security threat as a channel for militants and foreign intelligence agents. On the same day, Mayor Sobyanin said migrant workers should not be encouraged to settle down in the capital.

About 60 percent of Russia’s 5 million migrant workers are in the country illegally, the Federal Migration Service said in March.

Putin also called on Monday for the development of a “civilized migration policy.”“We are ready to attract qualified foreign specialists,” he said. “But these people should be adapted to life in Russia, should know the Russian language, the history of our country, the basics of our laws, and respect our traditions.”

Ethnic tensions in Russia occasionally spill over into violence. In December 2010, a rally involving thousands of nationalists outside the Kremlin ended in mass detentions and several deaths; they had been protesting the release from police custody of a young man from the North Caucasus - a part of Russia - suspected of killing an ethnic Slav football fan.

Sobyanin announced last week that he would resign as mayor but days later said he would run for re-election in a snap election, which is now scheduled for September 8. Critics said he would have an unfair advantage in the race since other candidates would have very little time to campaign.

The nationalist Liberal Democratic Party’s candidate for mayor of Moscow, Vladimir Ovsyannikov, said the Russian capital must rid itself of foreign migrants within three years to give more jobs to Russian residents.

Most foreign migrant workers in Moscow are from former Soviet republics in Central Asia and are allowed to enter the country without a visa.

Russia has the world’s largest number of illegal migrants, accounting for almost 7 percent of the country’s working population, according to a 2012 report by the Organization for Economic Cooperation and Development.