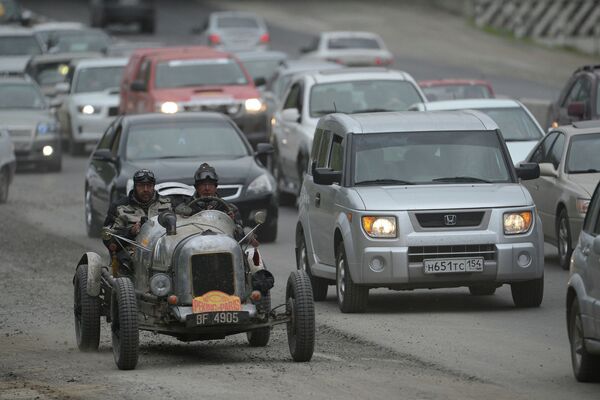 © RIA Novosti . Alexander Kryazhev
Subscribe
A British driver is among three people, including a baby, who were killed in a car crash in Siberia on Wednesday, local police have said.

NOVOSIBIRSK, Russia, June 12 (R-Sport) - A British driver is among three people, including a baby, who were killed in a car crash in Siberia on Wednesday, local police have said.

The unnamed female driver, 46, was driving a classic Chevrolet in a 12,500-kilometer rally from China to France, the police said.

“A road traffic incident involving a vintage car, which was taking part in the Peking to Paris rally 2013, happened June 12 at 13.40 at the 212th kilometer of the Tyumen-to-Omsk federal highway,” the Tyumen region police department said in a statement.

"The driver of the Chevrolet car, a 46-year-old female resident of Great Britain, died."

The incident was a head-on crash between the British driver’s Chevrolet 6 Tourer and a Volkswagen Polo, the police said, adding that, of the Polo’s passengers, a 31-year-old man and a baby died and a woman is in intensive care in hospital.

The Peking to Paris rally is an endurance event set up in honor of a 1907 endurance rally that was a landmark in early motorsport history.

Drivers travel 12,500 kilometers over 33 days, starting from a section of the Great Wall of China, and competitive time trial sections are included.

When contacted by R-Sport, the rally's organizers declined to comment and said they were preparing to release a statement.

Updated at 20.10 with quotes, background, reaction of rally organizers, edits throughout.