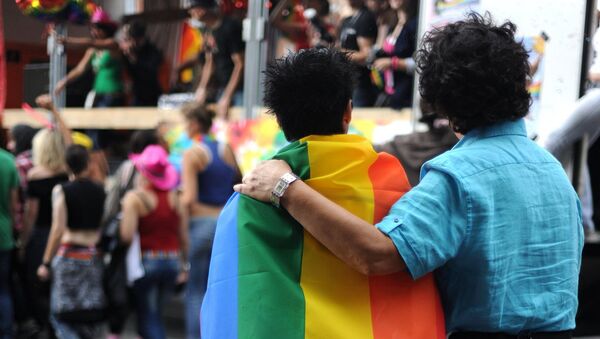 © Flickr / Guillaume Paumier
Subscribe
International
India
Africa
Russia’s lower house of parliament on Tuesday gave its final approval for a controversial “anti-gay” bill, with only one of the 436 lawmakers present abstaining and no votes against, after a day of clashes outside the building and dozens of arrests by police.

MOSCOW, June 11 (RIA Novosti) – Russia’s lower house of parliament on Tuesday gave its final approval for a controversial “anti-gay” bill, with only one of the 436 lawmakers present abstaining and no votes against, after a day of clashes outside the building and dozens of arrests by police.

The first draft of the bill, passed by the State Duma on January 25, used the term “homosexuality” but this was replaced by the term “non-traditional sexual relationships,” in the final version Tuesday.

About 20 protesters were detained outside the parliament building, police said. Gay rights demonstrators reportedly scuffled with Russian Orthodox activists, who were chanting, “Russia is not Sodom!” and throwing eggs and bundles of stinging nettles. Some of the men and women rallying against the bill kissed in an act of protest.

The LGBT demonstrators were heavily outnumbered by the anti-gay activists, Reuters reported.

After deputies who supported the bill emerged from parliament later in the day, they were met with cheers from anti-gay activists, and some of the lawmakers were tossed into the air in celebration, according to Russian media reports.

Ilya Ponomarev, a lawmaker with the minority A Just Russia party, was the only deputy to abstain from the vote, Vice Speaker Sergei Zheleznyak, a member of the ruling United Russia party, was quoted as saying.

There are a total of 450 deputies in the State Duma, and a majority of 226 was needed for the bill to pass.

There will also be tougher fines for promoting such relationships in the media or on the Internet: from 50,000 rubles to 1 million rubles, or even 90 days of arrest for people involved in organizations found guilty of the offense.