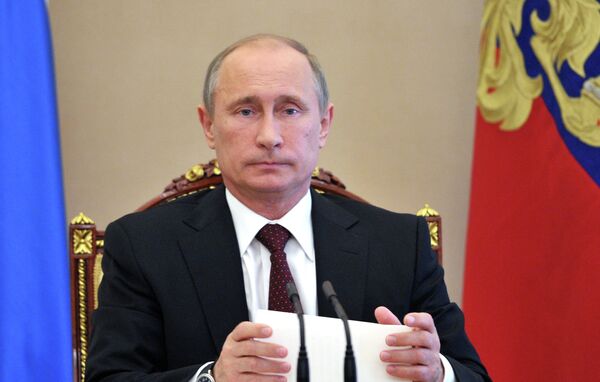 © RIA Novosti . Alexei Nikolskiy
/
Go to the mediabank
Subscribe
International
India
Africa
Russian President Vladimir Putin said Tuesday that he was prepared to give Georgia a role in security at next year’s Winter Olympics in Sochi, which borders the Caucasus country’s breakaway region of Abkhazia.

MOSCOW, June 11 (R-Sport) – Russian President Vladimir Putin said Tuesday that he was prepared to give Georgia a role in security at next year’s Winter Olympics in Sochi, which borders the Caucasus country’s breakaway region of Abkhazia.

Russia and Georgia fought a short war in 2008 over another separatist region, South Ossetia, which Russia recognizes as independent and Georgia considers part of its territory.

The two countries still do not have formal diplomatic relations, so an Olympic role for Georgia could be a powerful gesture of reconciliation. Abkhazia, where Russia maintains a strong military garrison, is just eight kilometers away from some of next year’s Olympic venues.

“Of course, we are absolutely ready for such help,” Putin said, when asked whether a Georgian security contribution would be accepted.

“We want to repair our relationships. We have a very warm attitude to Georgia. We are very close peoples."

He did not specify whether such help could include Georgian police on the ground.

Security at Sochi will be tight, and test events have taken place with a heavy police presence. The issue came under the spotlight in April when two suspects with links to Russia’s volatile North Caucasus allegedly detonated bombs at the Boston marathon.

Georgia confirmed last month that it would not boycott the Olympics, ending years of uncertainty.

“Regarding the decision of the new Georgian government to take part in the Olympics, to take steps to compromise, we see those,” Putin said.

Had Georgia chosen to boycott, it would be the first country to do so since North Korea refused to compete at the 1988 Summer Olympics in Seoul because of its ongoing state of war with South Korea.

The only previous Winter Olympic boycott came when Taiwan refused to compete at the 1980 Games in Lake Placid, New York, over a dispute about what its team should be called.
Next year's Winter Olympics will be held from February 7 to 23.