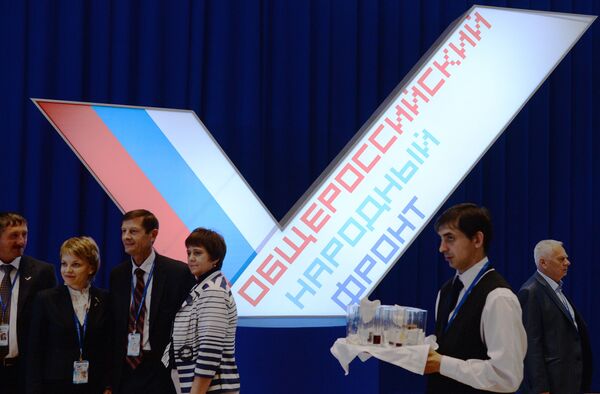 A new pro-Kremlin movement promising to be a public watchdog of sorts began its official founding congress on Tuesday, announcing that Russian President Vladimir Putin would be invited to join as leader.

MOSCOW, June 11 (RIA Novosti) – A new pro-Kremlin movement promising to be a public watchdog of sorts began its official founding congress on Tuesday, announcing that Russian President Vladimir Putin would be invited to join as leader.

“Vladimir Putin is being offered a special role – as the movement’s leader,” said Lyudmila Shvetsova, a former Moscow city official and senior member of the All-Russia People’s Front, known by its Russian initials, ONF.

She added that the leader must be elected at the congress, which Putin is expected to attend Wednesday, a public holiday called the Day of Russia.

The new movement will be a "supra-party" organization that aims to get political parties to "snap into shape," said Dmitry Badovsky, director of the Institute of Socioeconomic and Political Studies, a foundation that currently funds the nascent ONF.

"Parties are going to have to snap into shape when they realize there is an organization like ONF around," he said.

He added that ONF activities would be financed through donations and contributions from members once the movement is officially registered.

Valery Fadeyev, another congress delegate and a member of the Public Chamber, a national advisory body, said ONF activities will focus on healthcare, education, migration, entrepreneurship, family and other important social issues.

In addition to formally selecting a leader, the congress has a number of other procedural issues on its agenda, among them the election of three co-chairs and a decision on membership – specifically, will it be for individuals or for organizations.

Delegates are also discussing the possibility of renaming ONF the People’s Front for Russia, said Vyacheslav Lysakov, a lawmaker in Russia’s lower house of parliament, the State Duma.

ONF was established in 2011 ahead of controversial elections that filled parliament with pro-Kremlin deputies, returned Putin to the presidency and sparked widespread protests in Moscow and some other large cities after allegations of vote fraud.

Thus far, the group, which claims 2,500 organizations as members, has had little impact on Russia’s political life.