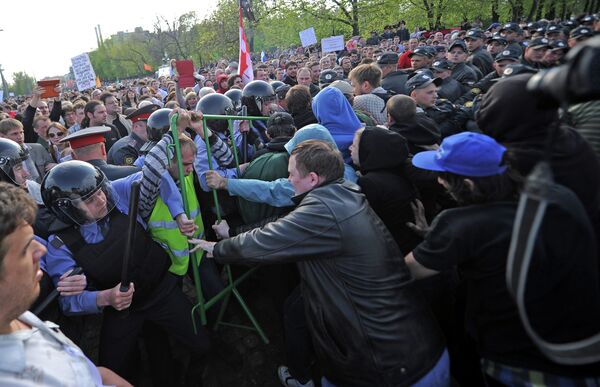 © RIA Novosti . Vladimir Astapkovich
Subscribe
International
India
Africa
This month, 12 protesters are standing trial over clashes with police at a massive 2012 opposition rally in Moscow, with dozens more prosecutions expected. The clashes became a pivotal moment for Russia’s opposition movement, shattering illusions of an easy victory, and the case has grown increasingly convoluted.

MOSCOW, June 11 (Alexey Eremenko, RIA Novosti) – This month, 12 protesters are standing trial over clashes with police at a massive 2012 opposition rally in Moscow, with dozens more prosecutions expected. The clashes became a pivotal moment for Russia’s opposition movement, shattering illusions of an easy victory, and the case has grown increasingly convoluted.

What’s the case about? Here is an attempt to sift through the muck and spell out seven basic issues, with three arguments for the prosecution, three for the defense, and one that can play out either way in the event of a fair trial.

First, some background: The rally took place May 6, 2012, in Moscow's Bolotnaya Square, across the river from the Kremlin. Eighty-two police reported minor injuries, and 650 people were briefly detained.

Violence erupted after the column of protesters got bottlenecked in narrow police cordons near the entrance to the square and then tried to break through. What exactly happened is a matter of vehement debate. Opposition groups – which are to rally in support of the defendants Wednesday – insist that police provoked the clashes; law enforcement officials blame opposition provocateurs and cast the riots as an attempted putsch by leftist rabble-rousers.

The 12 suspects face charges of mass rioting (up to five years in prison) and/or use of non-life-threatening force against police (up to 10 years). The case has grown to gargantuan proportions, with 70 volumes of evidence and hundreds of witnesses. A second round of preliminary procedural hearings is to start mid-month.

Please note that most of the hyperlinks below lead to Russian-language sources.

ARGUMENTS FOR THE PROSECUTION:

•    Prosecution:
Eight of 12 defendants assaulted police officers on Bolotnaya Square, according to case materials. Key incidents include breaking through a police cordon, strangling officers and seizing a truncheon from a policeman in order to beat other law enforcers. A petite 18-year-old anarchist, Alexandra Dukhanina, was filmed throwing a chunk of asphalt at – or at least toward – police. 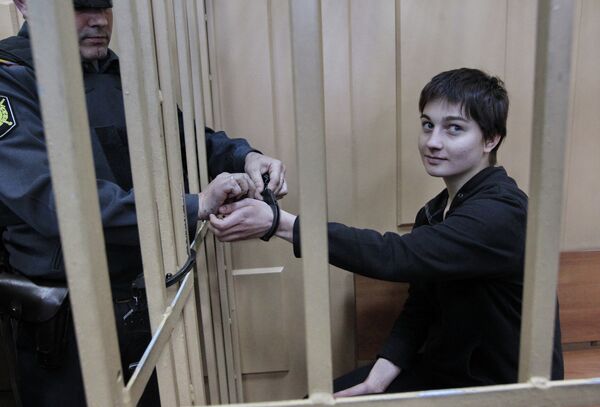 •    Defense:
Several defendants admitted to fighting the officers, but say they were acting in self-defense, protecting themselves against police violence. Sergei Krivov, 51, the truncheon seizer, said he grabbed it to prevent the officer from using it to beat innocent people, and never hit anyone with it. Dukhanina declined to testify against herself.

•    Prosecution:
In legal terms, not every kind of public violence amounts to “mass riots,” but investigators insist the May 6 events qualify. In addition to injuring scores of police officers, the protesters tore up sidewalks, and half a dozen portable toilets were overturned and made into barricades.

•    Defense:
It was not mass rioting. Russia’s Criminal Code gives no definition of “mass riots,” saying only that they are “accompanied by violence, pogroms, arson, property destruction, use of firearms and explosives and armed resistance to authorities.” The defense argues that only organized attacks on public infrastructure or governing bodies qualify as “mass riots” – which, they say, did not happen on Bolotnaya Square.

•    Prosecution:
Investigators believe that several leftist and anarchist leaders led groups of masked youth who deliberately started the fight with police. Some opposition leaders also called on supporters to consider setting up a permanent tent camp in the square, Occupy-style. Firebrand socialist Sergei Udaltsov had attempted doing so before on several occasions, but with little success. Udaltsov was also accused by a former ally of planning a string of mass riots across the country, and possibly attempting to storm the Kremlin on the day of the rally, which fell on the eve of President-Elect Vladimir Putin's inauguration following a disputed election.

•    Defense:
The provocateurs could have been police plants. Some came to join the crowd from behind a police cordon and had IDs that later kept police from detaining them, according to witnesses cited in an unofficial public investigation presented in April. The investigation (available in English) was conducted by a team of opposition activists and human rights champions, including prominent advocate Lyudmila Alexeyeva of the Moscow Helsinki Group.
None of the masked provocateurs has been identified so far, according to investigators. Udaltsov has denied the allegations of preparing mass riots.

ARGUMENTS FOR THE DEFENSE: 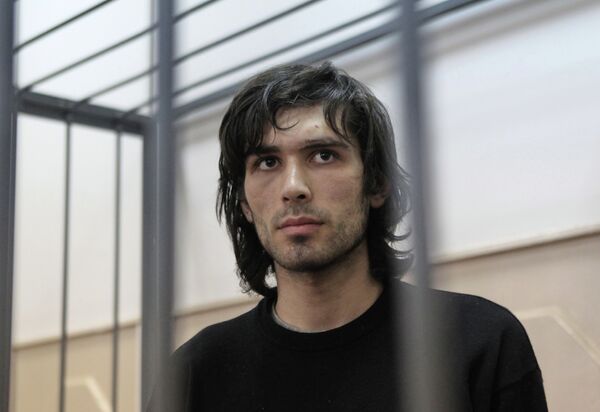 •    Defense:
Police and city officials promised a wide corridor for the marching protesters to file into Bolotnaya Square. But a police cordon on the site was unexpectedly moved an hour before the rally, forcing a crowd of thousands to squeeze through a 4-meter-wide space. Both the Alexeyeva-led investigation and 30 members of the Kremlin’s own council on human rights called this an attempt to exasperate the participants and make them more susceptible to calls for violence by provocateurs. No official explanation has been given for the bottleneck.

•    Prosecution:
One unnamed investigator blamed the bottleneck on Udaltsov's suspected plan to march toward the Kremlin. When authorities got wind of it, they moved the cordon further away from the presidential seat of power – leaving more room for reinforcements and less for the protesters.

•    Defense:
Police acted unnecessarily harshly, beating unarmed protesters and detaining people not involved in any violence. This angered the crowd, which attempted to resist, mostly by non-violent means such as forming human chains. This version of events was also backed by the Alexeyeva-led investigation, which explicitly accused police of using excessive force.

Police acted within their legal rights, officials say. No officers are facing charges over their actions in Bolotnaya Square, and Moscow City Hall has awarded new apartments to six policemen injured in the melee.

Though 650 people were detained after the clashes, only 28 have so far been implicated in the criminal case. They present a varied cast of political activists (leftist, rightwing and liberal), but also students, scholars, a businessman, a female retiree, an electrician, an ex-marine and an artist. Opposition leaders say this is a political message from the Kremlin to intimidate all social groups liable to oppose it.

The probe is ongoing. The 60-strong investigative team is studying hours of footage and thousands of photos from the square on blogs and social networks to identify the attackers. At least 87 people are in the “risk group” and could join the known suspects in the coming months, according to leaked case materials.

•    Prosecution:
Riot police identified most alleged attackers at police line-ups and using photos and video from the square, which they say caught the suspects in the act.

•    Defense:
Police officers often failed to identify the alleged attackers at first, only to change their stories weeks or even months later. This could imply they were ordered to back the investigation with false testimony.
As for footage, most of it is of poor quality and offers inconclusive proof at best. And impartial witnesses were hard to find in the three-hour-long mess on that May day whose aftereffects are far from over 13 months later.