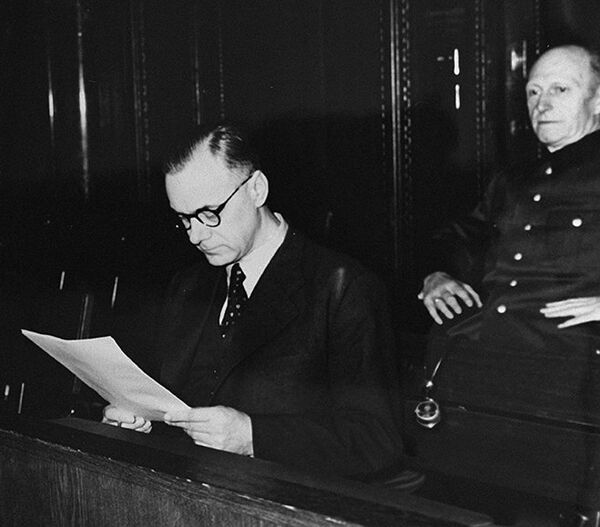 © Charles W. Alexander/Office of the US Chief of Counsel/US Holocaust Museum courtesy of Robert Jackson
Subscribe
International
India
Africa
US authorities have recovered the long-lost diary of top Nazi ideologue Alfred Rosenberg, in which Adolf Hitler’s minister for the occupied eastern territories outlines plans for occupying the Soviet Union and exterminating Soviet Jews and other citizens, the Reuters news agency has reported.

WASHINGTON, June 11 (RIA Novosti) – US authorities have recovered the long-lost diary of top Nazi ideologue Alfred Rosenberg, in which Adolf Hitler’s minister for the occupied eastern territories outlines plans for occupying the Soviet Union and exterminating Soviet Jews and other citizens, the Reuters news agency has reported.

The 400 pages of the diary that were recovered in a private home in upstate New York “include details about the German occupation of the Soviet Union and chilling plans for the slaughter of Jews and other eastern Europeans,” wrote Reuters, which was given exclusive access to view the US Holocaust Memorial Museum’s (USHMM) preliminary assessment of the diary.

In their assessment of the hand-written diary, which Rosenberg penned between 1936 and 1944, USHMM analysts said the Russian-born Nazi leader “sheds new light on a number of important issues relating to the Third Reich's policy.”

The diary “will be an important source of information to historians that complements, and in part contradicts, already known documentation," the analysts say, without going into detail about exactly how the diary contradicts accepted Nazi history.

That information may become available when details of the journal are announced at a news conference in Delaware on Thursday.

Rosenberg was named Nazi Reichsminister for the Occupied Eastern Territories in 1941, which gave him responsibility for crafting German policy in occupied parts of the Soviet Union, including the deportation of millions of Soviet civilians for forced labor in Germany and the planned annihilation of Soviet Jews.

He also oversaw the plunder of works of art and other valuable cultural objects in Nazi-occupied countries during the Second World War.

Born in 1893 in what is now Tallinn, Estonia, but was then part of the Russian Empire, he moved to France after the Russian revolution and in 1918 settled in Germany. He was convicted in 1945 as a Nazi war criminal at the Nuremberg trials and hanged on October 16, 1946.

His diary is thought to have been snuck out of Germany and over to the United States by Nuremberg prosecutor Robert Kempner, whose death 20 years ago led to legal wrangling over his papers – allegedly including the Rosenberg diary – between his heritors, his former secretary, the USHMM and a debris removal firm.

Officials recovered thousands of historical documents from Kempner’s home in 1999, but the Rosenberg diary was not among them.

The diary was recovered in the home in Lewiston, New York, of Herbert Richardson, 81, a religious studies professor turned book publisher who allegedly obtained the diary from Kempner’s former secretary, Margot Lipton.