Hard for Russians to Say What They Take Pride In - Poll 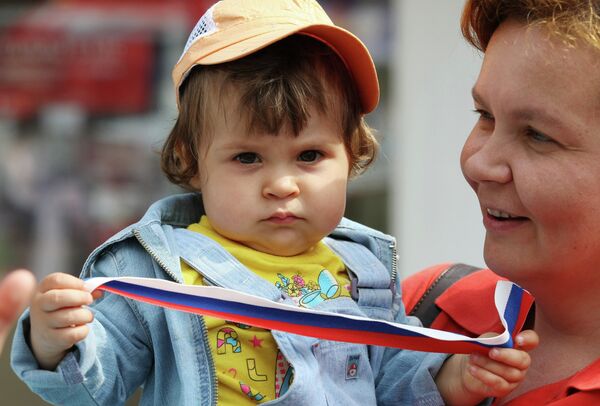 © RIA Novosti . Maxim Bogodvid
/
Go to the mediabank
Subscribe
International
India
Africa
It is difficult for Russians to name the country’s achievements and events in the country’s life in the past decades that they take pride in, an opinion poll showed.

MOSCOW, June 12 (RIA Novosti) - It is difficult for Russians to name the country’s achievements and events in the country’s life in the past decades that they take pride in, an opinion poll showed.

Most often, respondents asked by the All-Russian Center for the Study of Public Opinion (VTsIOM) to mention events over the past 10-15 years that they are proud of named Russia winning the bid to host the 2014 Winter Olympics, which will be held in the Black Sea resort of Sochi (7 percent).

Six percent said they take pride in increasing living standards and economic growth (5 percent in 2005), and 5 percent were glad that the country’s international influence was strengthening (2 percent in 2005).

Space exploration won the pride of 2 percent of respondents, and the end to the war in Chechnya, 1 percent. One percent said they were proud of construction and restoration of churches (unchanged).

Forty-two percent said there was nothing to be proud of (37 percent in 2005), and 19 percent said it was difficult to answer the question (36 percent eight years ago).

Asked what the country has been successful in over the past few decades, 5 percent named scienctific achievements, 4 percent mentioned sports victories, and 4 percent, the living standard.

Russia’s economic development was mentioned by 3 percent and Sochi Olympics also by 3 percent.

Forty-two percent said there have been no achievements, and 28 percent failed to name any.