Russia No Security Rival to Washington – US Ambassador 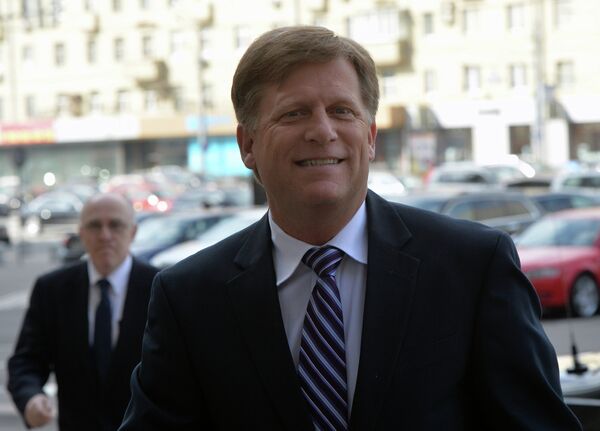 © RIA Novosti . Ilya Pitalev
/
Go to the photo bank
Subscribe
The US administration does not regard Russia as a rival in security matters but views Moscow as a partner with whom it can jointly resolve global issues, the US ambassador to Russia said on Monday.

MOSCOW, June 10 (RIA Novosti) – The US administration does not regard Russia as a rival in security matters but views Moscow as a partner with whom it can jointly resolve global issues, the US ambassador to Russia said on Monday.

“We do not consider Russia as a rival to the United States either in security or in the economy. President Obama favors relations that would benefit both countries rather than force a ‘zero-sum game’ on them, as during the Cold War,” according to a Russian-language transcript of McFaul’s speech at a seminar of the Moscow School of Political Studies.

Having “better relations with Russia” is in Washington’s national interests, McFaul said. “We believe so, and are working towards this goal,” he added.

McFaul cited nuclear arms control, and the situations in North Korea, Iran, and also Afghanistan, especially after the planned US troop withdrawal in 2014, as among the global issues that Moscow and Washington need to address together.

In mid-March, the US announced it was modifying its planned missile defense deployment in Poland, dropping plans to station SM-3 IIB interceptor missiles in the country by 2022. Russian officials responded by saying that this did nothing to allay their concerns over US missile defense in Eastern Europe, and reiterated their demand for legally binding agreements guaranteeing that Russia’s strategic nuclear forces would not be targeted.

A recent spy scandal in May involving Ryan Christopher Fogle, a US diplomat working as a third secretary in the embassy’s political department, has also worsened diplomatic relations between Moscow and Washington. McFaul was summoned by the Russian Foreign Ministry over the incident.

The US ambassador said he is optimistic about the future of US-Russian relations despite “big differences on Georgia,” referring to the military conflict between Russia and Georgia in August 2008, when Moscow’s ties with Washington were strained. Georgia lost control of over a fifth of its territory when South Ossetia and Abkhazia broke away and were recognized by Moscow in the wake of a brief war with Russia in August 2008.

Russian President Vladimir Putin and his US counterpart Barack Obama are to discuss anti-terror cooperation, including in investigating the Boston Marathon bombings, at the upcoming G8 summit in Northern Ireland’s Lough Erne on June 17-18, McFaul said.