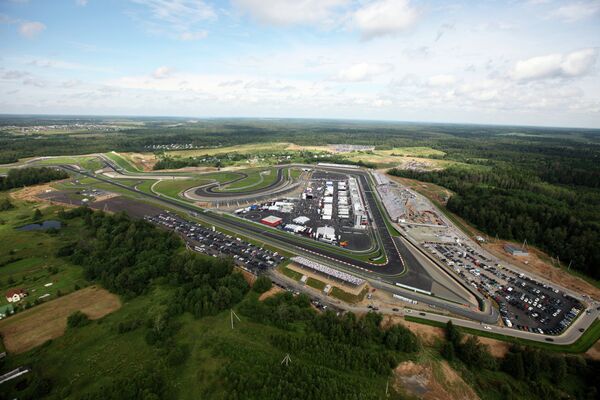 © RIA Novosti . Anton Denisov
/
Go to the mediabank
Subscribe
International
India
Africa
Lada cars have long been dogged by a reputation as slow, unreliable Soviet workhorses, but the Russian marque took a big step towards changing all that Sunday with two barnstorming drives on the racetrack.

VOLOKOLAMSK, Russia, June 9 (R-Sport) – Lada cars have long been dogged by a reputation as slow, unreliable Soviet workhorses, but the Russian marque took a big step towards changing all that Sunday with two barnstorming drives on the racetrack.

With Briton James Thompson at the wheel at Moscow Raceway, Lada earned its best-ever race finish of fifth in the World Touring Car Championship, a series that pits together modified road cars.

“It’s obviously the best weekend Lada’s ever had,” Thompson said. “That bodes well for the future. We need to keep the momentum going.”

Lada has flitted in and out of the WTCC since 2009 with different models. Last year, the company opted to stick with the Granta and gradually hone it into a racing car capable of competing with the WTCC's big marques - Chevrolet, Honda and BMW. In its everyday form, the Granta comes highly recommended by none other than Russian President Vladimir Putin.

In the day’s second race, Thompson looked a strong bet to finish on the podium before his chances were wiped out when a competitor slammed him into the barrier.

“We seemed to be the victim of a lot of other people’s accidents,” he said. “The fact of the matter is that we were fighting at the front. Instead of fighting to get into the points, we were already in the points fighting for the better positions.”

The pace shown Sunday is no fluke, nor the product of home advantage at Moscow Raceway, Thompson insisted. He said the raceway – Russia’s newest and highest-quality track, with a mix of long straights and slow sweeping turns – was actually a poor fit for the Granta, hinting at further potential yet to be unlocked.

“I don’t think this track really suits us but we’ve had a good performance here – that’s why I’ve cause to be optimistic,” he said.

The original Lada, produced from 1970 up until last year, was the butt of many a motoring joke for its boxy styling, lack of creature comforts and reputation for breaking down.