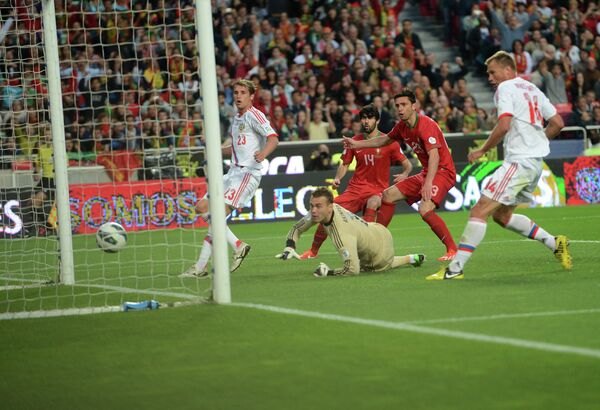 © RIA Novosti . Vladimir Astapkovich
/
Go to the photo bank
Subscribe
Portugal strengthened their hopes of a place at next year’s World Cup after an early goal from Helder Postiga proved enough to scrape a 1-0 home win over an out-of-sorts Russia side Friday.

LISBON, June 8 (R-Sport) - Portugal strengthened their hopes of a place at next year’s World Cup after an early goal from Helder Postiga proved enough to scrape a 1-0 home win over an out-of-sorts Russia side Friday.

Portugal’s three points send them top of Group F with 14 points from seven games, but they have played two more games than Russia, who are second on 12 points, and one more than Israel, third on 11.

Victory was a boost for a Portugal side who had won just one of their last six games, including a 1-0 loss in Moscow in October. Russia manager Fabio Capello loses his unbeaten record from his first eight games since taking charge 11 months ago.

"I think that the team played a good game. We didn't deserve the defeat - a draw would be fair," Capello said. "In football it happens that one team plays better, or sometimes the other. We were playing away to strong opponents."

Portugal coach Paulo Bento said the result evened out the two teams' record after Russia's win in Moscow. "In Russia we played well and were punished for a mistake at the start of the game. Both the games against Russia were balanced."

Postiga poked his team ahead nine minutes into the game at Benfica’s Estadio da Luz, sending the ball in off the post off Miguel Veloso’s low, curling free-kick from wide.

"It was a very well taken free-kick. It's hard to stop when the ball flies in like that," Capello said.

Russia midfielder Denis Glushakov should have equalized on 35 minutes when he contrived to send the ball wide in front of an open goal.

Portugal goalkeeper Rui Patricio had taken the bizarre decision to palm away a cross well away from his goal, leaving him stranded as Yuri Zhirkov crossed for Glushakov, who hit the ball with the outside of his right boot and sent it trickling past the post.

Portuguese star Cristiano Ronaldo had a poor game by his high standards, making little impact on the Russian defense. He sent one shot straight at Russia goalkeeper Igor Akinfeev from a good position shortly after the break, and his other efforts were off-target speculative shots.

The Russians had a penalty claim turned down when an Alexander Kerzhakov cross came off the arm of Fabio Coentrao in the box as the defender slid to block. Soon after, Kerzhakov claimed he was fouled by Bruno Alves while running through on goal, but referee Damir Skomina disagreed.

"I don't see reasons why Russia could complain. The referee took the same decision for both teams," Bento said. Capello refused to comment on the officiating.

On 78 minutes, Russian substitute Vladimir Bystrov believed he’d scored, but it was ruled out for a blatant offside. Russia’s last real chance came when Roman Shirokov hit a tame effort straight at Rui Patricio from the edge of the box.

Late on, Portugal had chances to secure the win with a second goal on the break as Russia pushed forward, but failed to take them.

There were injury worries for Capello, who was forced into two first-half substitutions in quick succession. First, Glushakov replaced Viktor Faizulin, who did not seem badly hurt, before the uncapped Alexei Kozlov came on for right-back Alexander Anyukov, who suffered a back injury.

Capello was also forced to contend with an injury crisis in the run-up to the game, which left Kerzhakov as the only fit striker from his original squad. When the Zenit St. Petersburg front man failed to perform, Russia were left with few attacking options, and were almost wholly reliant on winger Bystrov in attack in the second half.

Earlier Friday, Azerbaijan went fourth in the group with a 1-1 draw at home to Luxembourg, who stay sixth and last.

Russia are next in action away to Northern Ireland on August 14 in a game postponed from March due to bad weather. September 6 will see the next full round of games, as Russia host Luxembourg, Portugal visit Belfast and Israel take on Azerbaijan.