First Woman in Space Ready for No-Return Mission to Mars 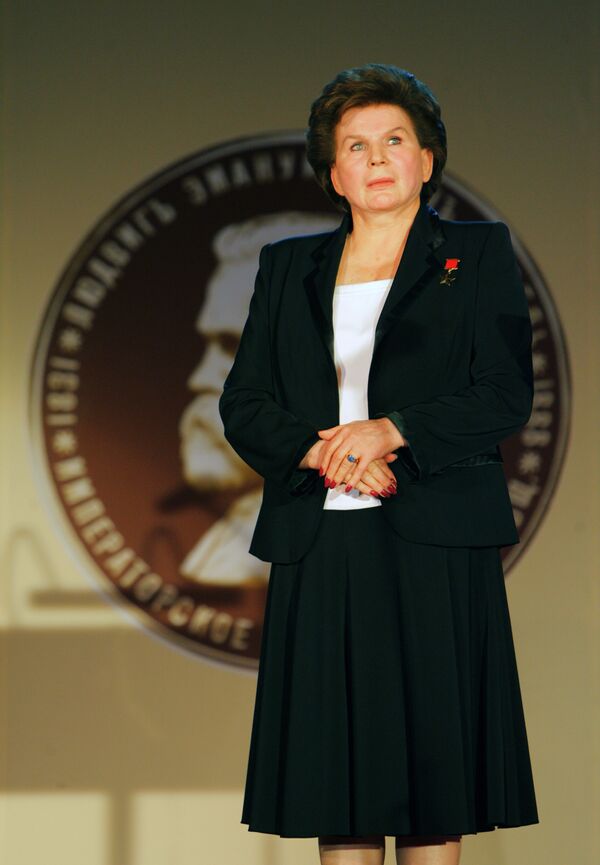 © RIA Novosti . Alexei Danichev
/
Go to the photo bank
Subscribe
Valentina Tereshkova, the first woman in space, said Friday that she disapproved of space tourists and would be prepared to leave retirement to undertake a one-way trip to Mars, her favorite planet.

STAR CITY, MOSCOW REGION, June 7 (RIA Novosti) – Valentina Tereshkova, the first woman in space, said Friday that she disapproved of space tourists and would be prepared to leave retirement to undertake a one-way trip to Mars, her favorite planet.

Tereshkova, 76, was speaking ahead of the 50th anniversary of her June 16, 1963, blastoff, which propelled her into the record books and made her one of the Soviet Union’s most feted astronauts.

“Of course, it’s a dream to go to Mars and find out whether there was life there or not,” Tereshkova said. “If there was, then why did it die out? What sort of catastrophe happened?”

While she said that she thought the first manned flight to Mars would be a suicide trip, she volunteered to take part. “I am ready,” she said.

Tereshkova spent three days orbiting the Earth in 1963 and is one of only three female Russian astronauts to have taken part in a space mission, compared with over 50 of their counterparts in the United States.

Not all aspects of modern space flight are to Tereshkova’s taste. She said the privilege of going into space should be reserved for scientists and professional astronauts, and not be available to the highest bidder.

There have been eight space tourists since 2001, with each cosmic jaunt costing upward of $20 million.

“Only specialists should be making space flights because, while there have been a lot of flights and more than 50 astronauts, there is still a lot that hasn’t been studied,” Tereshkova said. “But if they [the people going into space] are specialists, if they can bring some use working aboard a spaceship, then be my guest.”

Tereshkova was part of a small team of women assembled by the Soviet authorities as potential astronauts in the wake of the first manned space flight by Yury Gagarin in 1961, but she was the only one who actually went into space. The next Russian woman to do so, Svetlana Savitskaya, blasted off 19 years later, in 1982.

Tereshkova, whose call sign was "Seagull," also revealed a secret about her pioneering space flight: that a technical error almost precipitated disaster when she was about to re-enter the Earth's atmosphere.

On landing, Tereshkova said she was approached by Sergei Korolyov, the father of the Soviet space program, who addressed her as "my little seagull" and begged her not to reveal the mistake.

"So I kept the secret for exactly 30 years," Tereshkova said.