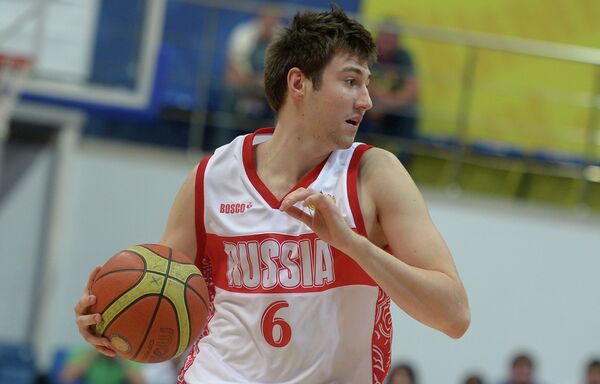 © RIA Novosti . Alexey Filippov
/
Go to the photo bank
Subscribe
Russian basketball prospect Sergey Karasev told R-Sport on Thursday he has not received a first-round promise from an NBA team ahead of the draft later this month.

MOSCOW, June 6 (R-Sport) – Russian basketball prospect Sergey Karasev told R-Sport on Thursday he has not received a first-round promise from an NBA team ahead of the draft later this month.

The 19-year-old small forward returned to Moscow from the United States earlier this week, meaning he will skip private team workouts before the June 27 draft. The move prompted speculation in American media on Wednesday that Karasev – who had been in Las Vegas at an open workout run by his agents at ASM Sports – had received a guarantee.

Karasev said he left the U.S. because he does not have time for individual workouts as he prepares for the World University Games in Kazan next month. He added that a bevy of NBA scouts have already seen him play with this club team BC Triumph Lyubertsy and at the Hoops Summit in Portland, Ore., in April.

“There is no truth [to the rumors],” Karasev said. “I don’t have a guarantee and nobody has promised me.”

Teams sometimes provide guarantees as a way of keeping a desired player from working out for clubs with higher draft picks – but it would be an unusual strategy for an international prospect like Karasev, who is not as exposed as U.S. college players.

The 6-foot-7 native of St. Petersburg, who averaged 16.3 points as one of the youngest players in the VTB United League last season, is projected to go in the mid- to late-first round, and has drawn praise for his shooting ability and on-court maturity.

He won a bronze medal with Russia at the London 2012 Olympics and is expected to play an integral offensive role for the national team at EuroBasket 2013 in September.

With his weight hovering around 200 pounds, Karasev acknowledged that he needs to bulk up before entering the NBA.

“I really need to prepare my body physically,” he said. “My mind is ready for the NBA game so the most important thing is my physical game.”