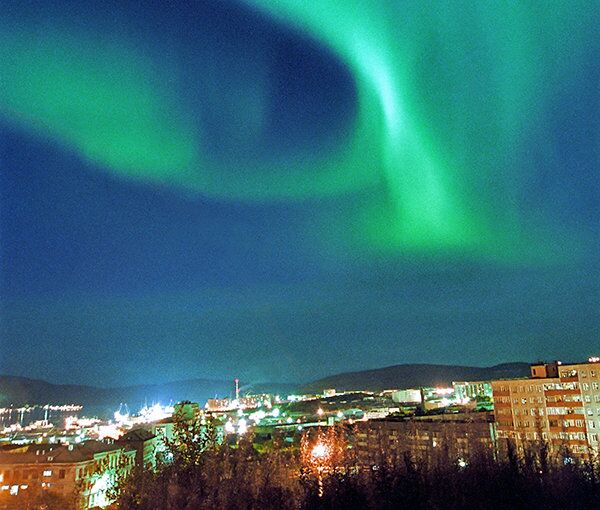 Severe space “weather” can knock out satellite communications and GPS systems, expose space tourists and astronauts to dangerous levels of radiation, and even cause massive blackouts on Earth that could last up to two years, scientists and NASA officials warned at a conference here on Tuesday.

WASHINGTON, June 4 (by Karin Zeitvogel for RIA Novosti) – Severe space “weather” can knock out satellite communications and GPS systems, expose space tourists and astronauts to dangerous levels of radiation, and even cause massive blackouts on Earth that could last up to two years, scientists and NASA officials warned at a conference here on Tuesday.

A sun storm on the scale of one that happened in 1859, which was recorded by British brewer and amateur astronomer Richard Carrington, would potentially have sweeping consequences on huge population clusters in the United States, experts at the Space Weather Enterprise Forum said.

“The United States population that is at risk of an extended power outage from a Carrington-level storm is between 20-40 million, with an outage duration of possibly 16 days to one to two years,” said Kathryn Sullivan, the first woman to walk in space and now the acting administrator of the National Oceanic and Atmospheric Administration (NOAA), which hosted Tuesday’s conference.

“The highest risk of storm-induced outages of these magnitudes in the United States is between Washington DC and New York City,” she said, citing a report released last month by global insurance giant Lloyd’s of London, which urged businesses to “think about their exposure to space weather.”

“Space weather is not science ﬁction, it is an established fact,” the Lloyds report said.

Space storms do have their hidden plusses: the Northern Lights, or aurora borealis, are a by-product of a storm in space. The super-storm of 1859 caused skies as far south as the Hawaiian Islands and Panama to erupt in red, green and purple auroras “so brilliant that newspapers could be read as easily as in daylight,” NASA says on its website.

But the Carrington super-storm also sent a mammoth cloud of charged particles and detached magnetic loops — a “coronal mass ejection” — crashing into Earth’s magnetic field, where it caused a geomagnetic storm that severely disrupted the telegraph system, which in the late 1800s was communications’ equivalent of the Internet today.

“Spark discharges shocked telegraph operators and set the telegraph paper on fire. Even when telegraphers disconnected the batteries powering the lines, aurora-induced electric currents in the wires still allowed messages to be transmitted,” NASA says.

An event on a similar scale today could cripple communications, said Sullivan.

“Our dependence on sophisticated electronics technology for almost everything we do today has introduced a new vulnerability into our societies,” she said.

“We can’t prevent space weather from happening but we can become more resilient to it,” including by improving our capacity to accurately predict space weather events, taking steps to lessen the blow from space storms, and recovering better and faster when a space storm does hit.

Space weather is “one of six potential emergency scenarios in the upcoming shortlist of White House National Exercise Programs for 2013-14,” Sullivan said, referring to training exercises that test the readiness of the United States to face various crisis scenarios.

The United States is also working with international partners to improve global readiness for the next big space storm, said NASA Administrator Charles Bolden, who next week will take part in the 56th session on the United Nations Committee on the Peaceful Uses of Outer Space, due to be held in Vienna, Austria.

The UN committee this year, for the first time, recognized space weather caused by solar activity as “a concern on par with close, approaching asteroids,” Bolden said.

NASA is also collaborating with the European Space Agency on its Solar Orbiter mission, which aims to “brave the fierce heat” and study the sun from “closer than ever before,” Bolden said, stressing that space weather, like terrestrial weather, “is a problem that crosses all borders.”