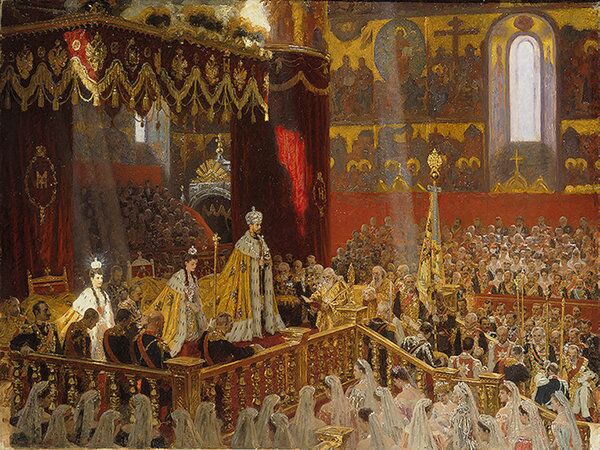 Although 117 years have passed since the last tsar was crowned, the pomp and circumstance surrounding Russian coronations continue to awe people worldwide. Here are 70 images that bring back the imperial splendor of Russia's bygone coronation ceremonies.

June 4 (by Suleiman Wali for RIA Novosti) – The last Russian emperor (tsar), Nicholas II, was crowned 117 years ago. Although more than a century has passed since that event, the pomp and circumstance surrounding Russian coronation ceremonies—no matter the era—have awed people worldwide.

At Washington’s Hillwood Museum & Gardens, a special exhibition titled “Pageant of the Tsars: The Romanov Coronation Albums,” has attracted thousands of visitors since it debuted in February. The museum is marking the 400th anniversary of the founding of the Romanov dynasty, putting on display the coronation albums created over the course of the family’s reign.

Here are 70 images, some from the Hillwood exhibit, that bring back the splendor of the bygone Russian coronation ceremonies.

1. Tsar Nicholas II and Tsaritsa Alexandra were the last monarchs to be crowned in Russia in May 1896. Not only did their assassinations in 1917 mark the end of the Romanov dynasty, but they also concluded centuries of royal rule.

2. During the reign of the Romanovs (1613 to 1917), seven coronation albums were created, such as this one for Nicholas II.

3. These elaborate albums, some of which took years to complete and measured up to three feet in length, illustrated the grand celebrations associated with the crowning of a new monarch. Here, a double-portrait of Emperor Alexander II and Empress Maria Alexandrovna was included in their coronation album.

4. Alexander III's coronation album was the first created and printed entirely in Russia. This image shows the monarch's procession through Red Square in 1883.

5. Even when the imperial capital was located in St. Petersburg, Russian coronations were always held in Moscow's Dormition (Uspensky) Cathedral in the Kremlin.

6. Huge crowds gathered inside the Kremlin, as they did here for the coronation of Nicholas II in 1896.

7. A similar photo angle shot recently shows the Grand Kremlin Palace in the background and Palace of Facets to the right. The Annunciation Cathedral, which looks similar to the Dormition Cathedral from the outside, is to the left. There are several churches located within close proximity of each other inside the Kremlin, which simply means "fortress" in Russian.

8. The interior of the elaborately decorated Dormition Cathedral is filled with sunlight prior to the 1896 coronation of Nicholas II.

9. Similar to other European coronations, the Russian ceremonies formalized the monarch's position as both head of church and state. Here, worshipers gather inside Dormition Cathedral in modern-day Moscow.

10. A day before the coronation, the emperor would make his ceremonial return to Moscow from St. Petersburg, Russia's imperial capital since the 1700s. Here, Alexander II is depicted passing through the city's Triumphal Arch in 1856 as crowds cheer.

11. The Triumphal Arch, a monument to Russia's victory over Napoleon, is adorned with banners and decoration for Nicholas II's coronation.

12. The Triumphal Arch, rebuilt after being dismantled in the 1930s, is seen in a new location in modern-day Moscow.

13. Other major cultural sites outside the Kremlin, such as the Bolshoi Theater, were also decorated for Nicholas II's coronation festivities.

14. This drawing shows the Bolshoi illuminated for the coronation of Emperor Alexander II in 1856.

16. This painting of Alexander II in the Bolshoi was included in his coronation album.

17. Inside the Bolshoi today.

18. Back at the Grand Kremlin Palace, royal regalia, including the crowns of the emperor and empress, were laid out before their coronations. They would then be moved in strict order to the Dormition Cathedral.

20. The diamond-encrusted imperial crown, chain and scepter, symbols of unbridled power and wealth.

21. The Great Imperial Crown was made by court jewelers for the coronation of Empress Catherine the Great in 1762. It is adorned with rare pearls and nearly 5,000 diamonds. The diamond cross on top rests on a 398-carat red spinel.

22. The royal chain, known as the Order of St. Andrew, is covered in diamonds. Its centerpiece is the double-headed eagle, the Russian empire's symbol that it looked both to the East and West.

23. The famous 189-carat Orlov Diamond adorns the royal scepter. It has been widely reported that the diamond was stolen from the eye of a statue of a Hindu deity in India in the 18th century, and was eventually bought by Count Grigory Orlov—one of Catherine the Great's lovers.

24. The empress' crown, known as the "Lesser Imperial Crown," was made entirely of diamonds. At Nicholas II's coronation, one was worn by his mother and an identical one was made for his wife, Alexandra.

26. This painting from Alexander III's coronation album shows the orb and crown at the foot of two thrones.

27. Two royal sedan chairs, which look similar to the thrones, were carried in for the coronation ceremony of Nicholas II in 1896.

28. Inside the Grand Kremlin Palace, imperial thrones remain in the same location as they would have been placed on coronation day. The palace is one of several inside the Kremlin.

29. This carriage of Empress Catherine the Great was used during coronation festivities.

30. Here, another coach carries Nicholas II along the Kremlin Wall on his coronation day in 1896.

31. This film footage shows a member of the royal family being transported inside an ornate carriage during Nicholas II's coronation.

32. On the morning of his coronation, the tsar would be met at the Palace of Facet's Red Porch, where he took his place beneath a large canopy held by a phalanx of Russian generals and officers.

33. Tsar Nicholas II and Tsaritsa Alexandra descend the stairs of the Red Porch on the day of their coronations.

34. The procession would then move to Dormition Cathedral, where they would be met by the Patriach of Russia and other church leaders.

35. The Dormition Cathedral, shown here in modern-day Moscow, was built in the 15th century.

36. The coronation ceremony inside the cathedral would begin with the singing of the 101st psalm. The tsar would then recite a prayer, and would be followed by religious leaders who would bestow blessings upon him.

37. Following the recitation of prayers, the tsar would then direct the archbishop to hand him the imperial crown, which he would place on his own head—a symbolic moment in which he took full power. Here, a painting shows Nicholas II crowning himself in 1896.

38. After other rituals, the emperor would then crown his wife, as is depicted in this painting of Alexander III placing the Lesser Imperial Crown on the empress' head in 1883.

39. The crowning of the emperor's wife did not become a ritual until after Peter the Great's reign in the 17th century, following his own breaking with custom. Here, a painting from Alexander II's coronation album shows the newly crowned monarchs in an embrace.

40. After the crowning, the tsar would remain standing as everyone else would kneel to pray for him, as is depicted in this painting of Alexander II.

42. Once inside, the tsar would also recite a coronation oath, in which he swore to preserve the monarchy and rule with justice and fairness. Below, Nicholas II is being anointed.

43. The Royal Doors are seen open in this recent religious ceremony presided over by the current Patriarch of Russia inside the Dormition Cathedral.

44. This image shows Nicholas II receiving Communion behind the Royal Doors. These kinds of images were not part of the coronation album, but were created by other publishers to be distributed among the public.

45. Printed in small quantities—ranging from as few as 400 to as many as 1,600—the coronation albums were given to other courts, diplomats, courtiers, family members, and honored guests attending the coronation. Below, an image from Nicholas I's coronation album shows the monarch being embraced by his brother who ceded power to him.

46. The tradition of albums started when Peter the Great commissioned one to celebrate the crowning of his wife, Catherine I in 1724. In this painting, Alexander III, the last tsar's father, receives the royal orb in his left hand.

49. Catherine the Great wears the same royal regalia, many of which was created during her reign in the 18th century.

50. This portrait shows Tsaritsa Alexandra, wife of Nicholas II, in her 1896 coronation clothing and jewelry.

51. A Russian postcard depicts the last tsar and tsaritsa together.

52. Following the 1896 ceremony, the emperor and other royals leave Dormition Cathedral.

53. After further rites were conducted in two other Kremlin cathedrals, the tsar would proceed back to the Palace of Facets beneath his majestic canopy. Here, a coronated Alexander III is surrounded by onlookers.

54. Alexander III's eldest son is shielded by the same canopy just 13 years later, after his father died from a kidney ailment at age 49.

56. Footage from that day shows the bustling procession from behind. Nicholas II's coronation was the first to ever be filmed.

57. The cortege passes by the Kremlin's Tsar Bell.

58. Tourists gather around the same bell inside the Kremlin today.

59. The tsar's procession was lined with honor guards.

60. With the canopy parked, the crowned tsar and tsaritsa greeted the crowds from the Red Porch.

62. In a tradition that was started by Nicholas I, the rulers would then bow their heads three times toward their subjects as a sign of devotion. That scene is captured in this lithograph of Nicholas II and his wife.

63. Thick crowds stretched through Red Square and Moscow. During Nicholas II's coronation, more than 1,300 people were trampled to death.

64. Inside the palace, the newly crowned rulers greeted various ambassadors and officials, including representatives of their Muslim subjects, as is depicted in this image from Alexander III's coronation album.

65. Here, the eastern representatives were captured on film in 1896.

66. The coronation banquet would be held that evening. In this painting, Alexander III sits with his wife inside the Palace of Facets.

67. The same corner of the 15th century Palace of Facets is seen here.

68. Following the banquet, the emperor and empress attended other ceremonies, which included balls and operas. Here, Alexander III and other royals are depicted at the Bolshoi Theater in 1883.

69. On coronation night, fireworks would light up parts of the city and Red Square.

70. The sky above St. Basil's Cathedral is illuminated by fireworks today, as it likely would have during a post-coronation celebration. The Kremlin wall stands to the right.