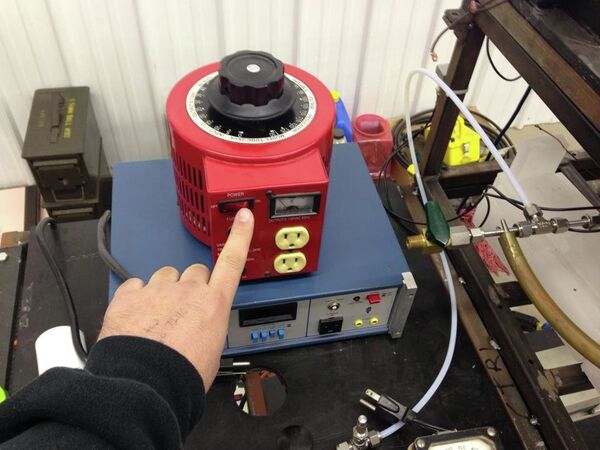 © Conrad Farnsworth
Subscribe
A US teenager has built a nuclear fusion reactor in his dad’s garage, he told RIA Novosti on Monday, adding his name to a select group of a dozen high school students from around the world who have achieved fusion with homemade devices.

WASHINGTON, June 3 (RIA Novosti) – A US teenager has built a nuclear fusion reactor in his dad’s garage, he told RIA Novosti on Monday, adding his name to a select group of a dozen high school students from around the world who have achieved fusion with homemade devices.

Conrad Farnsworth’s reactor is small and built with parts he ordered online.

The 18-year-old from Newcastle, Wyoming, built the device as his entry for the prestigious Intel International Science and Engineering Fair (ISEF), in which thousands of high school students from around the world compete for $4 million in scholarships, prize money, prestige and things to put on their resumes.

Farnsworth’s homemade reactor did not win the ISEF competition, but it did allow him to add his name to a very short list of youngsters who have created nuclear fusion reactors. Most of them are American, with the exception of Michal Racko of Slovakia.

As Farnsworth’s achievement made the news in the United States, older science nerds wondered if the Wyoming teen and the other youngsters had, in fact, built their own reactors and achieved fusion, or if the US media were getting it wrong.

“…Fifteen high school students in the world have built nuclear fusion reactors. How is this possible?” asked Joel on a physics chat forum.

“It's possible that the newspaper reporters didn't understand the distinction between an accelerator and a reactor,” said Ben Crowell on the forum.

Farnsworth told RIA Novosti in an email that the reactor he built “is an accelerator of sorts, using electrostatic attraction (- attracting +).

“Sometimes collisions between hydrogen (deuterium) nuclei occur and sometimes those collisions actually fuse the nuclei together. It's all a game of probability,” he said.

Back on the grown-up physics chat forum, Terry Bollinger wondered if the homemade reactor was able to generate “useful net outputs of energy.”

“That you cannot do even in the most advanced fusion test center in existence,” Bollinger noted.

Farnsworth says on his website that “amateur reactors will never produce power; their main purpose is education.”

“If I were ever able to generate useable power out of this, I would be long dead from the radiation poisoning that would ensue,” he added.

That’s not to say that nuclear power achieved by fusion is unsafe. The energy form has been touted as having the potential to provide almost limitless supplies of clean, safe and sustainable energy without the downsides of nuclear power produced by fission.

Unlike nuclear-fission power plants, fusion reactors do not produce high-level radioactive waste and cannot be used for military purposes.

“But the reason it would kill me is because I have no way of shielding myself from the radiation coming from my device, other than using distance,” Farnsworth said.

“A professional, power-generating reactor would be shielded and much safer.”

Among the other teens who have built nuclear fusion reactors are 15-year-old Thiago Olson, whose device produced just enough heat to warm up a cup of coffee, and Taylor Wilson, who is, so far, the youngest fusion reactor builder, completing his at the age of 14.

Farnsworth’s reactor was not enough to win him ISEF, which was held last month in Phoenix.

He was, in fact, disqualified on a technicality, and the overall competition was won by 19-year-old Romanian Ionut Budisteanu, who took home a check for $75,000 for his model of an affordable, self-driving car that detects traffic lanes and curbs and notes the real-time position of the car.

Budisteanu’s car would cost around $4,000 to make -- roughly the same as a small, homemade nuclear fusion reactor.