Over 3,000 Injured in Turkey Protests in Last 2 Days - Report 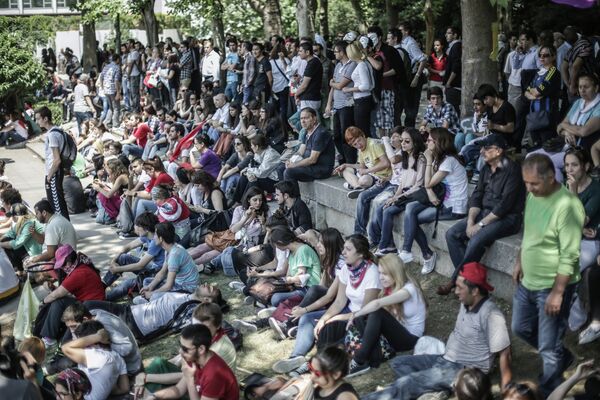 © RIA Novosti . Andrey Stenin
/
Go to the photo bank
Subscribe
Over 3,000 people were injured and one killed in Turkey over the last two days as anti-government protests kept spreading across the country on Monday, CNN reported citing data from the Turkish Medical Association.

MOSCOW, June 4 (RIA Novosti) - Over 3,000 people were injured and one killed in Turkey over the last two days as anti-government protests kept spreading across the country on Monday, CNN reported citing data from the Turkish Medical Association.

According to the association, at least 3,195 people were hurt in demonstrations on Sunday and Monday, with 26 of them in serious or critical condition. One of the injured protesters died of sustained injuries, the association said.

Most of the injured people were reported in Istanbul, where demonstrations began before spreading to Ankara, Antalya, Izmir, Adana and other Turkish cities.

Protests started last week with some form of a sit-in of angered Istanbul residents against the planned demolition of Gezi Park, one of the few green areas left in central Istanbul, and to replace it with rebuilt Ottoman barracks and a shopping mall.

As the number of people protesting the mooted demolition of the park gradually increased, police moved in to disperse the crowds on Saturday by using tear gas. Outraged protesters attacked police and began hurling stones and bottles at policemen.

Protesters now accuse the authorities and particularly Turkish Prime Minister Recep Tayyip Erdogan of using the excessive force and they also demand the resignation of the premier, who they call authoritarian.

The United States and the European Union and have already urged the Turkish government to exercise restraint, while Amnesty International has condemned the use of tear gas by Turkish police as “a breach of international human rights standards.”