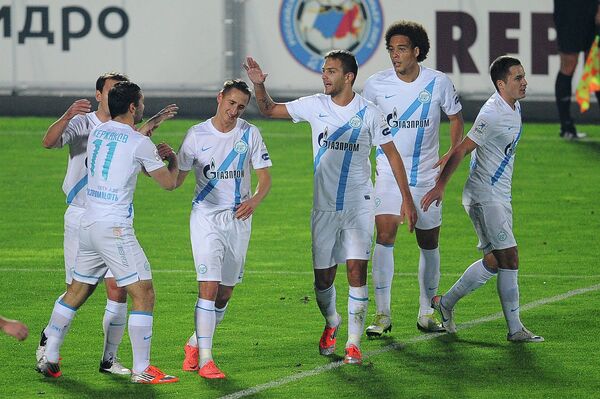 Real Sociedad's fourth-placed finish in the Spanish Primera Division means Zenit St. Petersburg will be seeded in the playoff round of next season's Champions League.

MOSCOW, June 2 (R-Sport) - Real Sociedad's fourth-placed finish in the Spanish Primera Division means Zenit St. Petersburg will be seeded in the playoff round of next season's Champions League.

The Russian side, who finished runners-up to champions CSKA Moscow this season, enter the competition in the third qualifying round. Should Luciano Spalletti's men advance, their previous exploits in the competition mean they will be seeded in the playoff stage along with Arsenal, AC Milan and German side Schalke.

Zenit received the seeding because they have had more Champions League success than Real Sociedad, who stole fourth place in the Spanish league from two-time Champions League runners-up Valencia with a 1-0 win over Deportivo la Coruna on Saturday.

Had Valencia, who went down 4-3 to Sevilla in a dramatic final day, qualified, Ernesto Valverde's side would have taken Zenit's seeding.

Meanwhile, Real's seeding is yet to be decided, with the other team in the playoff stage. Portuguese outfit Pacos de Ferreira is so far the only unseeded side.

The draw for the third qualifying round is July 19, with the first legs set for July 30-31 and the return legs August 6-7. Among Zenit's potential opponents are Swiss side Grasshopper, Red Bull Salzburg of Austria, and Danish outfit FC Nordsjaelland.

Zenit will look to improve upon this season's performance in the competition, which saw them crash out in the group stage with just two wins in six games.

Russia's other representatives in the competition, CSKA Moscow, gain passage directly into the group stage as the champions of one of Europe's top 12 leagues.