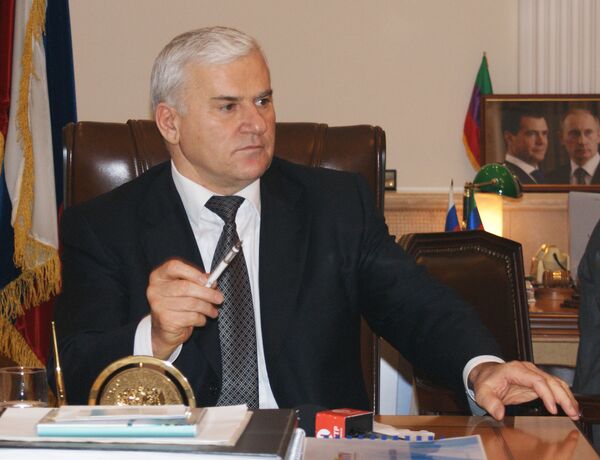 © Natalia Shkandyba
Subscribe
The mayor of Dagestan's capital Makhachkala, Said Amirov, has been detained on suspicion of having organized a murder of a Russian investigator, Investigative Committee spokesman Vladimir Markin said on Saturday.

MOSCOW, June 1 (RIA Novosti) – The mayor of Dagestan's capital Makhachkala, Said Amirov, has been detained on suspicion of having organized a murder of a Russian investigator, Investigative Committee spokesman Vladimir Markin said on Saturday.

“Amirov has been detained and convoyed to Moscow,” Markin said adding that a criminal case against Amirov in connection with the December 2011 killing of investigator Arsen Gadzhibekov in Dagestan’s Kaspiysk was opened on Friday.

More than 10 suspected Amirov’s accomplices have been also detained and an investigation is ongoing.

“[Amirov’s] implication in the crime and his detention is the result of a meticulously planned, diligent and professional work of Russian investigators and the Federal Security Service (FSB) agents,” he said.

Gadzhibekov, chief of the investigation department of Makhachkala's Sovetsky District, was shot dead near his house in Russia’s North Caucasus republic of Dagestan as he was leaving his car. He had participated in solving a number of crimes, including the 2010 terror attack in Kizlyar, that killed 10 and injured 270 others.

Earlier on Saturday, a police source told RIA Novosti security forces had blocked the mayor’s house and nearby streets and a helicopter was used in an operation to detain Amirov.

A police source said the detention came after a gunman, who was held in Makhachkala on Friday, told investigators about his links to the mayor.

Media reports said Amirov’s nephew, a deputy mayor of Dagestan’s Kaspiysk, Yusup Dzhaparov, has been also detained in connection with the investigator's murder. A police source said searches were being carried out in Makhahkala’s administration.