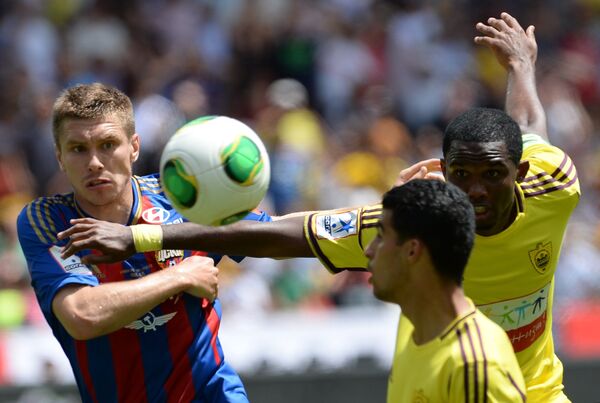 It is CSKA's seventh cup triumph since the fall of the Soviet Union and 12th of all time after an attritional game in the Chechen capital of Grozny, where the match was played for the first time.

Seydou Doumbia hit the winning penalty with a casual chip after Yuri Zhirkov had his spot kick against his old club saved and Jucilei smashed over.

"It was one of the hardest games of the season," a beaming CSKA coach Leonid Slutsky said. "The feeling is of pure happiness," he added before one of his players soaked him in water amid jubilant scenes after the dramatic shootout.

For Anzhi coach Guus Hiddink, the match could be his last: He said before the final that he would consider his future after it. The 67-year-old's contract ends this summer.

CSKA grabbed the opener after just seven minutes as Anzhi goalkeeper Vladimir Gabulov allowed Ahmed Musa's shot from the left to squirm under him and into the net.

Anzhi had spurned nearly a dozen chances by 73 minutes, when midfielder Lassana Diarra rifled a left-foot shot into Igor Akinfeev's top-right corner for a deserved equalizer.

Extra time saw Anzhi, who miss out on a maiden piece of silverware, dominate but fail to create any meaningful chances.

The shootout saw Mbark Boussoufa, midfielder Willian and Samuel Eto'o all score for Anzhi, while Pavel Mamaev, Vasily Berezutsky and Vagner Love all found the mark for CSKA.

"We gave everything in this game," said CSKA's Alan Dzagoev. "The guys did just great."

A scintillating game in the sweltering heat of southern Russia was characterized by an enthralling psychological duel between Anzhi forward Eto'o and Akinfeev, who saved several one-on-one attempts.

After Musa's tam opener, Anzhi should have leveled it right away but Eto'o's low shot was parried by Akinfeev and Boussoufa's follow-up rebounded off a defender's arm; the referee waving away strong penalty appeals.

Eto'o beat the offside trap on 35 minutes but was denied again as Akinfeev got a trailing leg in the way of his low shot. The Cameroonian made a darting run to the near post but his goalbound header was deflected over, before blazing over after a goalmouth scramble in first-half injury time.

Anzhi substitute Traore squandered a clear chance with his first touch in the second half, stabbing the ball wide after a perfectly weighted through ball from Eto'o.

Eto'o burst through again moments later but hit straight at the advancing Akinfeev, stretching his shirt over his head in frustration at the number of missed chances he was racking up.

In search of an equalizer, Guus Hiddink threw on a third forward on the hour mark, replacing defender Rasim Tagirbekov with young striker Oleg Shatov.

But the leveler came from an unexpected source as Diarra registered his first goal in 23 games since joining from Real Madrid.

The goal prompted Slutsky to bring on last season's top scorer Doumbia in place of holding midfielder Rasmus Elm, but it was Wernbloom's impulsive lunge that was to change the course of the game.

But Anzhi didn't relent and the shots continued raining down on Akinfeev, with Shatov and then Eto'o blasting over. The quality of the play visibly waned in the latter stages of extra time as both team struggled to cope with the head and the exhaustion of a long season.

CSKA qualified for next season's Champions League by winning the title; while Anzhi sealed a Europa League spot by finishing third in the league.

The cup holders, Rubin Kazan, had been knocked out in the round of 32 in September by second-tier Yenisey Krasnoyarsk.