Subscribe
International
India
Africa
The meteorite that blew up over Russia this year, hurting 1,500, came as a stark reminder of how vulnerable we are, with no protection against space rocks slamming into Earth. A possible solution: to hit dangerous asteroids with other asteroids, Russian scientists say.

MOSCOW, May 31 (Alexey Eremenko, RIA Novosti) – The meteorite that blew up over Russia’s Urals in mid-February, leaving 1,500 injured, came as a striking reminder of how vulnerable we are on our small, blue planet. It was suddenly palpably clear that we have no way of preventing celestial bodies from slamming into Earth.

The way out just might be to hit dangerous asteroids with other asteroids, Russian scientists say.

Several near-Earth asteroids can be towed into the vicinity of the planet to serve as a cache of celestial projectiles against incoming space threats, said Natan Eismont of the Space Research Institute of Russian Academy of Sciences.

“I was skeptical about it myself, until we actually tried to do computer modeling of the situation,” Eismont, one of the project’s authors, told RIA Novosti in a recent interview.

The orbiting asteroids can be “lined up” so that one passes 100,000 to 200,000 kilometers from Earth every few weeks or months, ready to be used against non-catalogued and hazardous asteroids, recent research by the Space Research Institute and the Higher School of Economics in Moscow suggests.

There are currently more than 9,000 near-Earth asteroids, or asteroids whose orbits bring them within 1 astronomical unit (149 million km or 92 million miles) of the Sun, and thus relatively close to the Earth as well. But this figure could be as little as 1 or 2 percent of their total number, Eismont said. New asteroids are discovered every day. 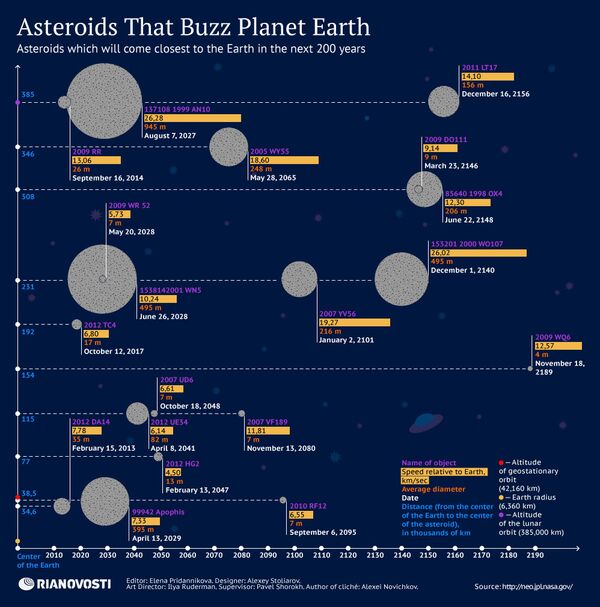 Most suitable asteroids have elliptical orbits that bring them close to Earth at certain points, while the rest of the time they are several astronomical units away.

It is currently possible to send an unmanned Proton rocket – a staple of the Russian space program –to land on an asteroid, carrying with it up to 2 tons of rocket fuel, Eismont said. Properly anchored, the rocket fuel would then ignite at a designated time, tweaking the asteroid’s orbit.

Space rocks best suited for planetary defense weigh 1,500-2,000 tons and are 10 to 15 meters in diameter – smaller than the meteorite that blew up over the Urals, which measured 17 meters across and weighed over 9,000 tons. The 99942 Apophis – which was considered a potential hazard until updated calculations rolled in earlier this year – is estimated to be 325 meters in diameter and weigh 40 megatons.

Asteroids the size of Apophis hit Earth about once every 63,000 years, experts say, but the casualties from this kind of event could reach 10 million, and that warrants some caution.

Meteorites such as the one that blew up over the Urals hit once every 50 to 80 years, Eismont said.

The program costs about $1 billion per Proton launch, and the equipment needed to maneuver an asteroid into position can be developed within 10 to 12 years, Eismont said.

This whopping price tag may suggest that the plan is doomed to the realm of sci-fi. But in fact, NASA is already doing something similar with its Asteroid Retrieval and Utilization project, which proposes to rope in a 500-ton asteroid and bring it into lunar orbit, where it can be studied by manned missions starting in 2025. The White House has supported a plan to allot $105 million in 2014 for the first stage of the NASA project, which has a total price tag of $2.6 billion.

The Russian project saw money from a state “megagrant” of 150 million rubles ($4.8 million) plowed into it, but so far remains purely on paper.

Commenting shortly after the meteorite incident in the Urals last winter, Russian Deputy Prime Minister Dmitry Rogozin said that planetary defense is a priority for Russia’s space industry. But the Russian government has so far not expressed any interest in the asteroid-ramming project.

The approach may counter some classes of celestial hazard, said Donald Yeomans, who heads the search for near-Earth objects at NASA’s Jet Propulsion Laboratory in Pasadena – a job that landed him on Time magazine’s 2013 list of 100 most influential people in the world.

“If the asteroid that was predicted to strike Earth was fairly large and massive, its deflection as a result of a controlled impact by a small asteroid might make some sense,” Yeomans told RIA Novosti.

However, smaller asteroids, though still dangerous, are better intercepted by ramming them with more maneuverable spacecraft, not other asteroids, he told RIA Novosti.

The Russian project raises a lot of technical problems, such as developing the asteroid-maneuvering equipment and anchoring it to the asteroid, said Vladimir Surdin of Moscow State University’s Sternberg Astronomical Institute.

“There are other problems too, but nothing fatal. The method needs work, [but] it should be in the planetary defense arsenal,” Surdin said.

And mankind needs just such an arsenal, given that, at least in Eismont’s view, some kind of “attack” from space is inevitable.

“Nobody can tell you when the next asteroid will come, but everyone would tell you that come it will,” Eismont said.

(Updated with correct date, May 31 instead of June 31, correct size of the asteroid 1998 QE2, and a revised definition of near-Earth asteroids.)