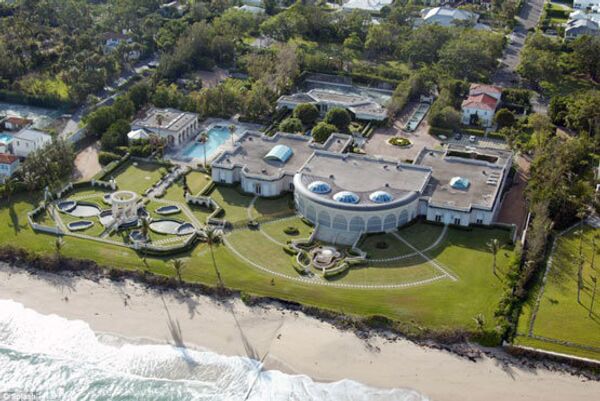 Russian fertilizer king Dmitri Rybolovlev, who paid US business magnate Donald Trump $95 million for an ultra-luxury beachfront home in Palm Beach, Florida five years ago, now plans to tear the palatial structure down, according to US media reports.

WASHINGTON, May 31 (RIA Novosti) – Russian fertilizer king Dmitri Rybolovlev, who paid US business magnate Donald Trump $95 million for an ultra-luxury beachfront home in Palm Beach, Florida five years ago, now plans to tear the palatial structure down, according to US media reports.

Celebrity gossip columnist Jose Lambiet reports a real estate source has confirmed the plans to him, citing mold as the reason for the planned destruction.

“It was South Florida’s richest ever transaction for a single family home,” Lambiet wrote, adding, “Fungus that grew in the high moisture beach air has become a Walmart-sized problem.”

“I don’t care about the house,” said Trump, according to Gossip Extra. “I bought it for $41 million, put in $3 worth of paint and gave it a good cleaning — and I sold it for the highest price ever for a single family home. I don’t know what he wants to do with it, and I couldn’t care less.”

But it is part of a contentious dispute between Rybolovlev and his estranged wife, Elena, who have been battling for years over how best to divvy up their substantial assets, estimated to be $6 billion to $12 billion. She filed a 2010 injunction in Palm Beach County Circuit Court in an effort to prevent him from disposing of or altering the Florida property.

“The courts in Switzerland… have issued an injunction against him transferring or doing anything with the property,” her attorney, New York lawyer David Newman, told the Palm Beach Post at the time.

Reached by RIA Novosti for comment on Friday, Newman said he hadn’t heard of the plans to tear down the property, and said the court action is still pending in Florida.

Lambiet said Rybolovlev could subdivide the property into as many as a dozen large beachfront lots. The source reportedly told him Rybolovlev is “pretty mysterious about his ultimate plans,” but added, “It’s clear that the house will be leveled by the end of the year.”