Giant Asteroid Zooming by Earth on Friday Has its Own Moon 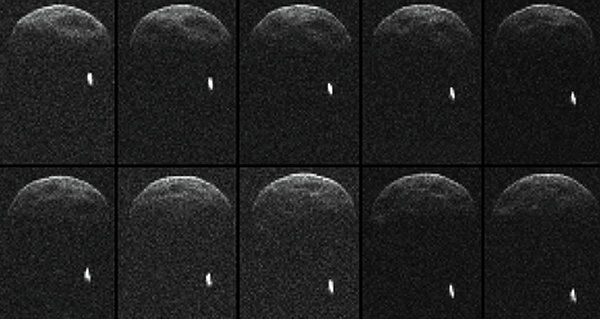 A giant asteroid will zip past Earth on Friday at the relatively close space distance of 3.6 million miles (5.8 million km) and it’s not alone. Astronomers studying the asteroid on Thursday noticed that it is bringing along a passenger – its own moon.

WASHINGTON, May 30 (RIA Novosti) – A giant asteroid will zip past Earth on Friday at the relatively close space distance of 3.6 million miles (5.8 million km) and it’s not alone. Astronomers studying the asteroid on Thursday noticed that it is bringing along a passenger – its own moon.

Telescopes around the world began picking up distant images of the approaching nearly two-mile-wide asteroid on Wednesday, and a day later observers soon realized that the space rock known as 1998 QE2 had another, much smaller rock – called a satellite – moving in an orbit around it.

“It was quite a bit of surprise… that is something we did not expect,” said NASA scientist Marina Brozovic, part of the observation team, during a teleconference Thursday from NASA’s Jet Propulsion Laboratory in Pasadena, California.

It’s not all that rare for large asteroids to have company. About 16 percent of those hurtling through space near Earth have one or sometimes two moons.

The 1998 QE2 asteroid is roughly the length of nine cruise ships. It gets its name, not from Queen Elizabeth II of England, or the well-known ocean liner, but from a naming process that marks the year it was first located – 1998 – followed by an alphanumeric code that indicates the time of month the discovery took place.

“This is one of the big ones. It was discovered about 15 years ago, and it’s one of the initial successes of our efforts to find the big asteroids that could hit the earth and cause global catastrophe,” said Paul Chodas, an astronomer with NASA, which is tracking the asteroid to study its size, shape, rotation and surface features in an effort to learn more about its origin and composition.

“It’s about 15 times farther than the moon is from the earth so it’s a very comfortable distance but for an asteroid this size, that’s a close shave,” said Chodas.

“We could see a few background stars, like white specks of light which weren’t moving, and then we actually saw this white star, what looked like a star, moving across the field very slowly, and we knew immediately that that was the asteroid because it was moving against the background of the stationery stars,” said astronomer Nicola Loaring, joining the teleconference from the South African Astronomical Observatory in Sutherland, South Africa.

The QE2 is small and faint, but under clear weather conditions with a powerful telescope, backyard astronomers in the southern part of the United States should be able to see it.

The giant asteroid’s closest point to Earth will be Friday at 4:59 p.m. EDT (2059 GMT). Scientists estimate it will be at least another 200 years before it gets this close again.

Correction: The original version of this story published Thursday stated the approaching asteroid was two miles wide. NASA said in a statement that it "is believed to be about 1.7 miles" in size. This story has been modified to reflect that approximation.