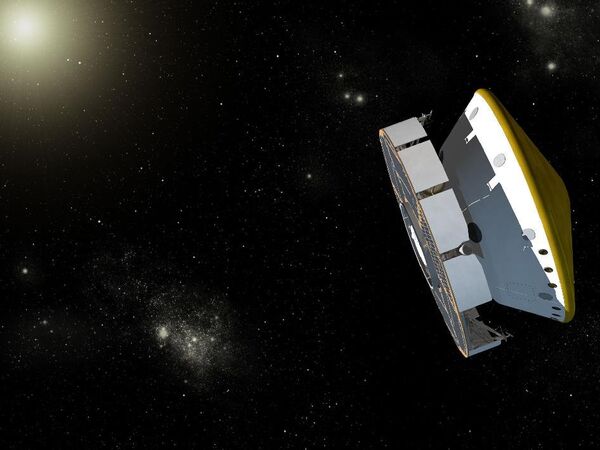 WASHINGTON, May 30 (by Karin Zeitvogel for RIA Novosti) – Flying to Mars in the spacecraft available today would expose astronauts to radiation levels that could significantly boost their risk of contracting cancer, a study published Thursday said.

“In terms of accumulated dose, it’s like getting a whole-body CT scan once every five or six days,” said Cary Zeitlin, a researcher at the Colorado-based Southwest Research Institute’s (SwRI) space science and engineering division, and lead author of the study published in the journal Science.

Researchers from the SwRI, NASA, the German Aerospace Center and Christian Albrechts University in Kiel, Germany used measurements collected by a Radiation Assessment Detector (RAD) on board the Mars Science Laboratory that delivered the Curiosity rover to the Red Planet to determine how much radiation astronauts would be exposed to during the 348-million-mile (560-million-kilometer) journey to Mars.

RAD measured radiation inside the spacecraft for 253 days, focusing on two types of radiation exposure that could pose serious health risks to astronauts in deep space.

These were long-term, low-dose exposure to galactic cosmic rays (GCRs) and short-term exposure to solar energetic particles (SEPs) produced by solar flares from the sun and coronal mass ejections such as those which were captured in stunning images earlier this month.

The data collected by RAD shows that an astronaut or cosmonaut would be exposed to around .66 Sieverts of radiation during a roundtrip to Mars with rockets and spacecraft with the protection used today.

One Sievert of radiation exposure is associated with a five percent increase in the risk of dying of cancer, the researchers note. The same level has been set by several space agencies, including Russia’s, Canada’s and the European Space Agency, as the maximum allowable exposure level during an astronaut’s or cosmonaut’s career.

Time spent on Mars would expose the space travelers to even more radiation, and this should be taken into account when new spacecraft and a Mars habitat are being developed, the scientists said.

The spacecraft used today are much more effective against low-energy SEPs than high-energy and highly penetrating GCRs, according to the study.

The vehicles developed to take humans to Mars would “likely have a ‘storm shelter’ to protect against solar particles,” Zeitlin said.

“But the GCRs are harder to stop and even an aluminum hull a foot thick wouldn’t change the dose very much,” he added.

The researchers also noted that the seven months – from Dec. 6, 2011 to July 14, 2012 -- during which RAD measured radiation on the spacecraft bound for Mars were relatively quiet in terms of solar activity, meaning there were not so many SEP particles bombarding the spacecraft.

“The unpredictable nature” of solar activity would impact radiation exposure, and the habitat and spacecraft developed for a Mars mission would help to mitigate exposure during a journey to the Red Planet.

NASA is looking to develop spacecraft that would make the trip to Mars in around 180 days – about two months less than it took the spacecraft carrying RAD and Curiosity – as one way of keeping down radiation exposure and making the journey a little less hazardous.