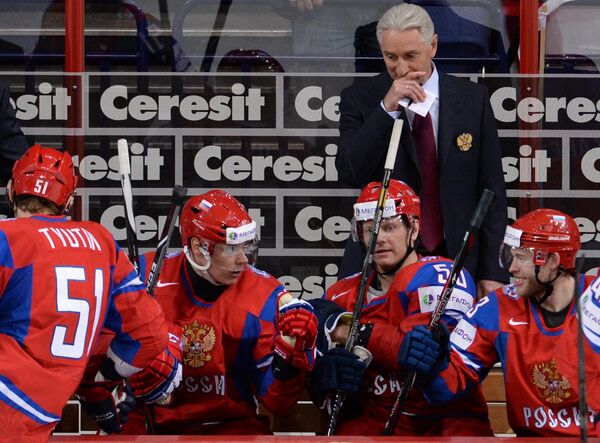 Russia was pounded 8-3 by the United States in the quarterfinals of the world championships earlier this month, a shock for a team aiming for gold at its home Winter Olympics next year.

Tretiak said the coaching staff and team’s performances had both been officially rated “unsatisfactory” at a meeting of the federation’s executive committee Tuesday, a stark contrast to the praise lavished on them after winning last year’s world championships.

“We can’t say that this plan or that task that was set was fulfilled,” Tretiak said, but added that Bilyaletdinov’s coaching job was safe.

When asked if anyone at the federation meeting had raised the possibility of changing the coaches, Tretiak said: “No, it wasn’t discussed.”

He suggested that one measure planned to improve the team was sending coaches on trips to North America to work one-on-one with some of Russia’s NHL stars.

Bilyaletdinov took charge of Team Russia after a fourth-place finish at the 2011 world championships for his predecessor Vyacheslav Bykov.

The Sochi 2014 Winter Olympics will be held from February 7 to 23 next year.