Nobel Laureate Andre Geim in Moscow to Back Embattled Minister 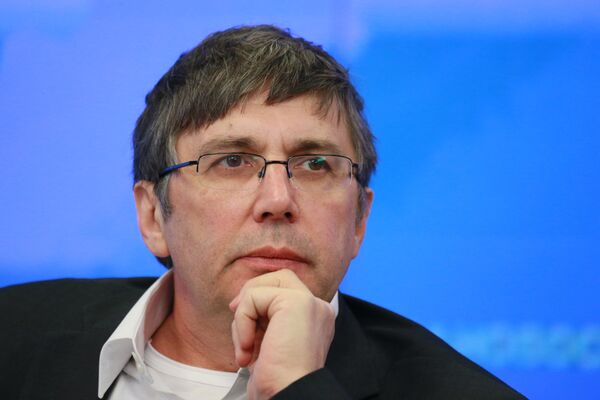 Nobel Prize Laureate Andre Geim has come to Moscow to throw his support behind Russia’s Education and Science Minister Dmitry Livanov in his struggle to reform Russian science.

MOSCOW, May 28 (RIA Novosti) - Nobel Prize Laureate Andre Geim has come to Moscow to throw his support behind Russia’s Education and Science Minister Dmitry Livanov in his struggle to reform Russian science.

Livanov has recently taken flak from both from representatives of so-called academic science and a number of politicians who are pressing for the minister’s resignation.

Members of Livanov’s inner circle link the attacks on him to the ongoing campaign to crack down on fake PhDs and plagiarism in research projects as well as his position on the need to reform the Russian Academy of Sciences.

Andre Geim said he knows Livanov as a good scientist and administrator.

“I’ve come here because Dmitry [Livanov] … has fallen out with everyone: universities, politicians, the Higher Certification Commission [VAK], the Russian Academy of Sciences and the media,” he told RIA Novosti ahead of a meeting of the Public Council of the Russian Education and Science Ministry he attended.

“I have several ‘windmills’ I’m tilting against, but Livanov has built an impenetrable wall of ‘windmills’ around himself, and I deeply respect him for that.”

He described Russia’s science and education system as “very strange.”

“In Russia, the Academy of Sciences combines the executive and legislative branches of government in science, and you know what that usually leads to. There is little hope that it will reform itself,” Geim said.

He said the Russian Academy of Sciences is reminiscent of “an old folks home” while university science looks like “a kindergarten,” stressing that it is time to start merging universities with RAS-affiliated institutes.

Sir Andre Geim, a Russian-born Dutch-British physicist, was awarded the 2010 Nobel Prize in Physics jointly with Konstantin Novoselov for his work on grapheme.

Russia’s higher education system has gained a reputation for being riddled with corruption. A deputy head of the Faculty of World Politics at the Moscow State University was caught in October accepting a bribe of 1 million rubles ($33,000) from a prospective postgraduate student. An investigation into that case is ongoing.

The VAK was itself involved in a scandal, after its former head Felix Shamkhalov was arrested in February accused of embezzling 1.5 billion rubles ($50 million) from state-owned Vneshekonombank via real estate fraud.

In February the Russian academic authorities revoked the doctoral degrees of 11 people accused of plagiarizing their dissertations, in what it said was the first step in a crackdown on an alleged network cranking out fake PhDs.