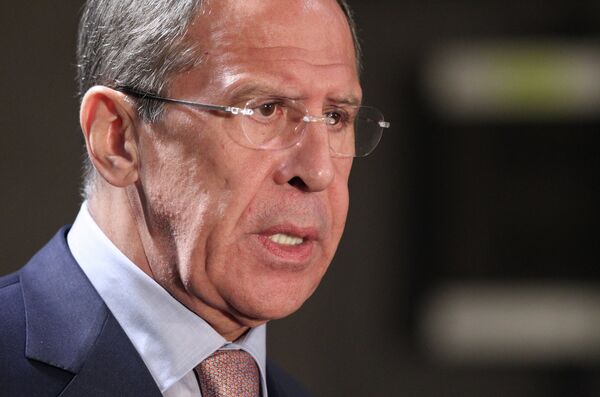 © RIA Novosti . Michail Mokrushin
/
Go to the mediabank
Subscribe
International
India
Africa
The European Union’s decision to end the embargo on arms supplies to the Syrian opposition is illegitimate and at odds with the norms of international law, Russian Foreign Minister Sergei Lavrov said Tuesday.

PARIS, May 28 (RIA Novosti) - The European Union’s decision to end the embargo on arms supplies to the Syrian opposition is illegitimate and at odds with the norms of international law, Russian Foreign Minister Sergei Lavrov said Tuesday.

“Discussing at an official level whether or not to supply arms to non-state subjects [Kremlin lingo for rebels] is in conflict with all norms of international law, including the principles of non-interference in states’ internal affairs, not to mention military intervention,” he said.

EU foreign policy chief Catherine Ashton confirmed on Monday that from now on, every EU member country has the right to make its own decision on arms exports to Syria, meaning that EU countries could now supply the Syrian opposition with weapons. She affirmed that any arms sent to Syria would be "intended for the protection of civilians," and added that the EU governments would review the position on sanctions on Syria before August 1.

Russian Deputy Foreign Minister Sergei Ryabkov said earlier in the day that the EU’s failure to extend the arms embargo on Syria may directly harm the upcoming international conference on Syria.

“This is a reflection of double standards and a direct blow to the international conference on Syria proposed by Russian Foreign Minister Sergei Lavrov and US Secretary of State John Kerry on May 7,” Ryabkov told journalists.

Russia’s NATO envoy, Alexander Grushko, said he hoped that the West would refrain from supplying weapons to Syria.

Lavrov also said Tuesday that Moscow was concerned by US- and French-backed efforts to scuttle an international peace conference for Syria. He did not elaborate.

Iran’s participation is necessary because “all countries that have influence on any side [of the Syrian conflict] should be represented there,” he said, adding that Iran is “one of the most important countries in that category.

This year’s conference is designed to be a follow-up to last year’s international meeting in Geneva that drafted a peace roadmap for Syria, where more than 80,000 people have died since fighting broke out between government forces and rebels in March 2011. According to diplomatic sources, the conference may take place in mid-June, but both Moscow and Washington have so far avoided giving exact dates.