Swiss May Turn Borodin Cash Over to Bank of Moscow - Paper 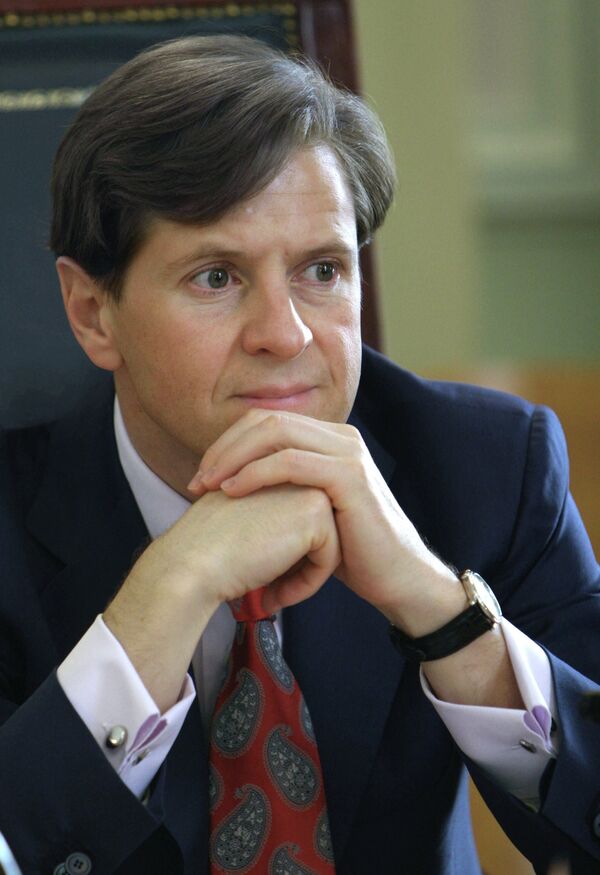 © Photo : Bank of Moscow
/
Go to the mediabank
Subscribe
International
India
Africa
Former Bank of Moscow head Andrei Borodin, whom the Russian Interior Ministry has put on an international wanted list, could lose a major part of his wealth after the Swiss authorities allowed the bank to sue for damages, Kommersant newspaper writes.

MOSCOW, May 27 (RAPSI) – Former Bank of Moscow head Andrei Borodin, whom the Russian Interior Ministry has put on an international wanted list, could lose a major part of his wealth after the Swiss authorities allowed the bank to sue for damages, Kommersant newspaper writes.

The Swiss Office of the Attorney General (OAG) has launched a criminal case against Borodin and has frozen the CHF354 million (around $368 million) in his Swiss bank accounts, and has declared Bank of Moscow an injured party in the case. The bank may now file for damages, to be paid from Borodin's frozen funds. Similar lawsuits may also be filed against him in other countries.

The OAG launched a criminal case against Borodin and his former first deputy Dmitry Akulinin on October 10, 2011, based on information provided by the Money Laundering Reporting Office of Switzerland (MROS).

According to MROS, Borodin abused his authority at Bank of Moscow and was involved in the embezzlement of over 14 billion rubles (approximately CHF430 million), which were transferred to his accounts and the accounts of his authorized representatives in several Swiss banks. The OAG and MROS have found and frozen CHF354 million in his accounts in Switzerland, Kommersant said.

Swiss law allows criminal income to be confiscated for the benefit of Switzerland. Documents which the bank's lawyers sent to Switzerland gave grounds for suspicion that the money which Borodin held in Swiss banks had been embezzled, Kommersant said.

On May 15, 2013, the Swiss Federal Criminal Court's Appeals Chamber dismissed Borodin's attorneys' appeals and declared Bank of Moscow an injured party in accordance with Swiss law.

The Appeals Chamber ruled that Russia is not an injured party, even though Bank of Moscow is connected with state structures. The bank was controlled by the Moscow City Government before VTB, which is 75% owned by the Russian government, took control of Bank of Moscow in spring 2011.

Russia launched a criminal case against Borodin and Akulinin in late 2010 on charges of large-scale fraud involving state funds. They are accused of improperly loaning $443 million to shell companies, which then transferred the cash to Yelena Baturina, the wife of Moscow former Mayor Yury Luzhkov and the owner of the construction empire Inteco.

Bank of Moscow had to be rescued by the Russian government in July 2011 in a $14 billion bailout, the biggest in Russian corporate history.

Borodin, whose Bank of Moscow functioned as the capital's chief investment vehicle under Luzhkov, fled to the UK in April 2011. In August 2012, he paid around 140 million pounds for a mansion in the English town of Henley-on-Thames, reportedly the most expensive piece of real estate in the UK at that time, the Sunday Times said.

He was given political asylum in Britain in April this year.