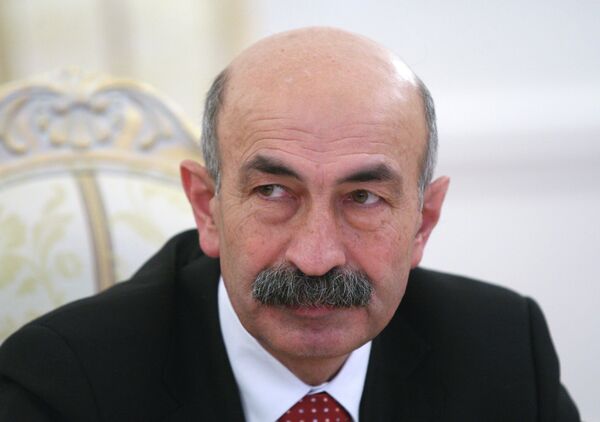 © RIA Novosti . Ilya Pitalev
/
Go to the photo bank
Subscribe
Georgia cried foul on Monday over the disputed region of South Ossetia setting up a barbed wire fence along its border.

TBILISI, May 27 (RIA Novosti) – Georgia cried foul on Monday over the disputed region of South Ossetia setting up a barbed wire fence along its border.

Murat Dzhioyev, a South Ossetian presidential representative for post-conflict settlement, earlier announced that the state border with Georgia would be reinforced in line with the republic’s legislation.

“The Georgian Interior Ministry confirms the setting up of barbed wire near the village of Ditsi by Russian border guards,” the ministry said in a statement, calling the move “illegal” and adding that the issue will be raised at the next round of Geneva negotiations in late June.

Under an interstate agreement with Russia signed on April 30, 2009, South Ossetia delegated state border protection functions to Russia until the republic establishes its own border guard service. South Ossetia’s border with Georgia is about 350 kilometers long.

Georgia lost control over one-fifth of its territory after South Ossetia and Abkhazia, another former republic within Georgia, broke away and were recognized by Moscow in the wake of a brief war with Russia in August 2008.

Both regions had enjoyed de facto independence since the early 1990s, following earlier conflicts with Georgia. Georgia repeatedly accused Moscow of aiding separatist movements in Abkhazia and South Ossetia at that time.

Moscow provides the breakaway republics with economic and military support and has recognized their independence, along with a handful of other countries. Most countries do not recognize South Ossetia or Abkhazia as independent states, but view them as part of Georgia.