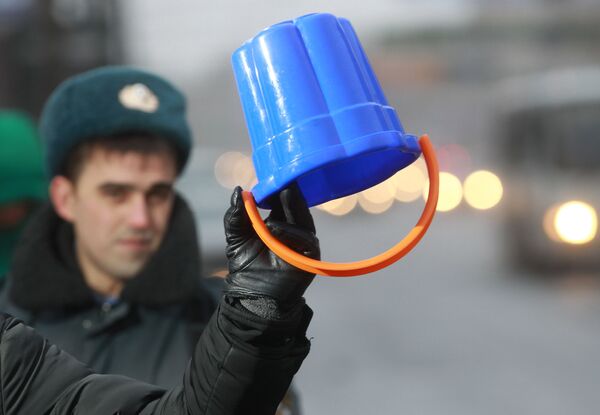 In a rare display of public humility, head of police in the Russian city of St. Petersburg publicly apologized to motorist rights activists allegedly beaten up by his subordinates.

MOSCOW, May 25 (RIA Novosti) – In a rare display of public humility, head of police in the Russian city of St. Petersburg publicly apologized to motorist rights activists allegedly beaten up by his subordinates.

But Sergei Umnov’s apology, published on the city police’s website late Friday, never specified what caused the conflict between traffic police and activists of the Blue Buckets group.

The victims said they chided two traffic police officers in the city of Kolpino outside St. Petersburg for parking on the sidewalk.

But then they were suddenly jumped by five men in plainclothes, including at least one more traffic police officer, Blue Buckets said in their Livejournal community, ru-vederko.

The attackers beat up the activists in plain view of the officers on duty, who smiled and refused to interfere, the report said.

One of the victims of the incident, which took place last Sunday, was hospitalized with skull fracture and possible kidney trauma.

Three officers involved in the incident were sacked earlier this week, along with three of their bosses.

However, only one of the alleged participants of the fight faced charges so far, with regional prosecutors saying they were unable to identify the other attackers.

Motorist groups are among Russia’s most active civil society movements, campaigning against alleged rampant abuse of traffic rules by state servants, many of whom are entitled to various road privileges.