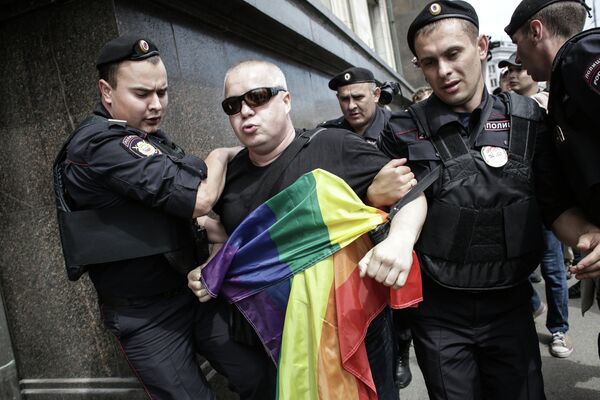 About 30 LGBT activists and their opponents were detained in the Russian capital on Saturday during a string of gay pride events in the city’s center, Moscow police said.

MOSCOW, May 25 (RIA Novosti) – Several dozens of LGBT activists and their opponents were detained in the Russian capital on Saturday during a string of gay pride events in the city’s center, Moscow police said.

The majority were held during an attempted gay pride rally in front of the City Hall, which refused earlier to sanction the event.

Police reported in the afternoon that least 30 people were detained in downtown Moscow.

At least one conservative protester was held by the Duma for assaulting two female LGBT activists, according to a RIA Novosti correspondent on the scene.

Several self-proclaimed Cossacks also appeared by the Duma to oppose LGBT activists, chanting a prayer but not intervening.

Later in the evening, gay rights activists and their opponents clashed at popular Gorky Park, which includes one of Moscow’s so-called “Hyde Parks” allotted by the city authorities for demonstrations. The police said that some 15 activists from both sides were held.

Gay rights activists have been requesting permits to hold a rally in Moscow since 2006, but city authorities repeatedly refused to sanction the event. An anti-xenophobia rally staged by gay rights activists was sanctioned in St. Petersburg last year, but ended in an attack by ultranationalists that police failed to stop.

Russian authorities stepped up the crackdown on the LGBT community since last year, with several regions passing the ban on the vaguely defined “gay propaganda among minors.” The ban was proposed for nationwide adoption and successfully passed the first reading in the State Duma in January.

Separately, some 50 LGBT activists successfully held a 30-minute gay pride rally in the Ukrainian capital Kiev on Saturday, police protecting them from a crowd of 400 conservatives opposing the event.