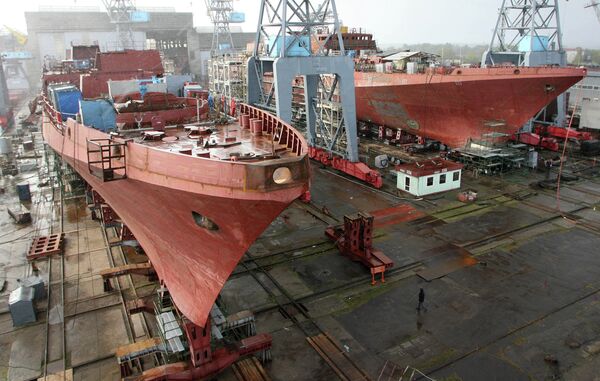 © RIA Novosti . Igor Zarembo
/
Go to the mediabank
Subscribe
International
India
Africa
The Russian government is ready to step in to sort out the crisis in Russian naval shipbuilding which is threatening to derail the defense procurement program, Deputy Prime Minister Dmitry Rogozin said on Friday.

MOSCOW, May 24 (RIA Novosti) - The Russian government is ready to step in to sort out the crisis in Russian naval shipbuilding which is threatening to derail the defense procurement program, Deputy Prime Minister Dmitry Rogozin said on Friday.

The government’s direct intervention in the situation is the only way of averting further problems, he said at a meeting with shipbuilding company heads.

“I can see only one option: Direct dialog between the government, the United Shipbuilding Corporation, and private companies working in this field to ensure that all plans are implemented and all problems that have emerged recently are rectified,” said Rogozin, who oversees the defense industry.

“We are planning to sink, and have already sunk big money into shipbuilding but I can’t see any payoff yet,” he said.

Rogozin made his comments the day it was revealed the United Shipbuilding Corporation (USC) is looking for money that was allocated to complete the Nerpa nuclear submarine for India’s Navy. A total of 500 million rubles ($15.9 million) has been lost.

He urged shipbuilders to employ specialists from abroad if they cannot find enough at home and promised to facilitate the granting of Russian citizenship to experts from other countries.

Russian President Vladimir Putin criticized the USC on Tuesday over delays in delivery of warships to the Navy. Putin announced at the meeting that Vladimir Shmakov, first deputy CEO of tank manufacturer Uralvagonzavod, has been appointed as new USC head, with a brief to sort out the delivery program.

Putin ordered USC's management to submit a report by October 15 on measures to improve the situation in the industry.

USC, established in 2007, is Russia’s largest shipbuilding and ship repair company. It comprises nine design bureaus and 39 shipyards. USC currently accounts for 70 percent of the domestic shipbuilding industry, according to its website. The corporation is wholly owned by the state.

Doubts about the ability of the industry to deliver warships on time and budget prompted the previous defense minister, Anatoly Serdyukov, to order Mistral-class amphibious assault ships from France in 2011. That deal has subsequently been criticised by Rogozin and other senior defense industry officials.

The Russian Navy is expected to receive 24 submarines and 54 surface warships of various classes by 2020, according to the Defense Ministry.

Putin said last year that the procurement of new warships and submarines for the Navy would be a priority over the next decade. The Russian government has allocated five trillion rubles ($166 bln) or a quarter of the entire armament procurement budget until 2020 for this purpose.