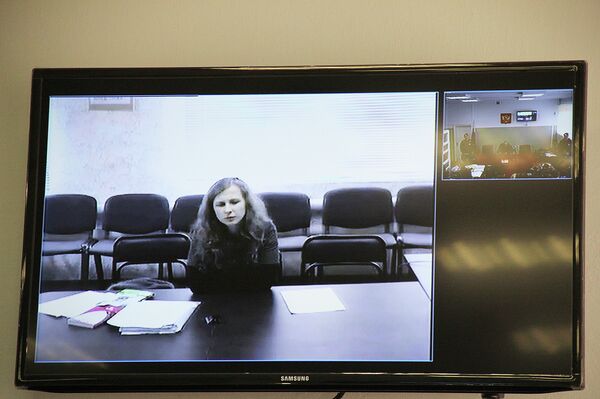 MOSCOW, May 23 (RIA Novosti) – Jailed Pussy Riot member Maria Alyokhina was denied parole on Thursday in a hearing that took place without her presence.

Alyokhina, jailed for two years last summer for her part in an anti-Putin protest in Moscow’s largest cathedral, took part on Wednesday in a parole hearing via video link from her prison in Russia's Perm Region.

However, she announced at the end of the hearing that she would start a hunger strike and boycott further proceedings in protest against not being allowed to attend the hearing - held in the Perm Region city of Berezniki - in person.

The 24-year-old also said Wednesday that her lawyers would not take part in the parole hearing. Officials appointed a state lawyer to represent her on Thursday.

A Moscow court sentenced Alyokhina and two other Pussy Riot members – Nadezhda Tolokonnikova and Yekaterina Samutsevich – to two years in prison in August 2012 for hooliganism motivated by religious hatred after the feminist group performed a brief "punk-prayer" in the Christ the Savior Cathedral in central Moscow in February 2012.

Tolokonnikova was denied parole last month. She and Alyokhina are due to be released in early March next year, having been in custody since their arrest in March 2012.