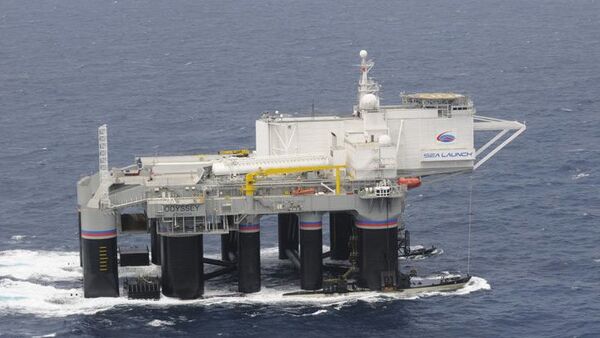 After 2014, Energia will be able to make five or more launches a year, he said, adding that “a great deal here will depend on our partners.”

Next year’s launches will be the first since one of Sea Launch’s Zenit vehicles carrying an Intelsat-27 telecommunications satellite crashed shortly after lift-off on February 1 this year. Russian officials blamed the incident on Ukrainian-made components and insisted no defects were found in Russian equipment.

Lopota confirmed on Thursday that the failure was due to a defect in a hydraulic oil pump.

Sea Launch was formed in 1995 as a consortium of four companies from Norway, Russia, Ukraine and the United States, managed by US aerospace giant Boeing. The project aimed to use a floating launch site to place rockets on the equator – the best possible location for launch – which gives the rocket additional speed on lift-off thanks to centripetal force caused by Earth's rotation.

Sea Launch resumed operations in 2011 after a 30-month hiatus that saw passage through US Chapter 11 bankruptcy, a change in ownership from Boeing to Russia’s Energia, and a move of the company headquarters from California to Switzerland.

Of the 34 previous Sea Launch rocket launches since 1999, three have failed, with a fourth placing its payload into an incorrect but recoverable orbit.

The first failure occurred on March 12, 2000, when a software error resulted in premature cut-off of the second stage, leaving its ICO F-1 satellite unable to reach orbit.

On June 29, 2004, during the launch of an Apstar 5 satellite, the upper stage shut down 54 seconds early due to a wiring fault, leaving the satellite in a lower than planned orbit.

A Zenit-3SL exploded on the launch pad on January 30, 2007, after an engine failure caused by debris in the turbo pump. The payload on that flight was an NSS-8 communications satellite for SES New Skies.

The most recent failure was that of the Zenit-3SL on February 1.