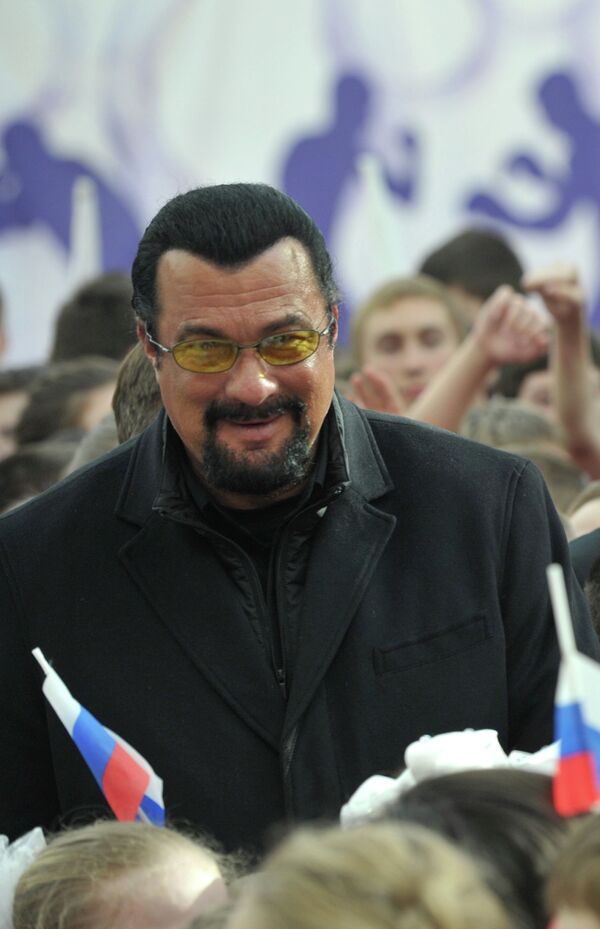 © RIA Novosti . Alexei Nikolski
/
Go to the photo bank
Subscribe
Hollywood star Steven Seagal spent time on Wednesday with Ramzan Kadyrov, the former militant fighter who now heads Chechnya, in the latest in a series of visits by Western celebrities to the volatile Russian republic.

MOSCOW, May 22 (RIA Novosti) – Hollywood star Steven Seagal spent time on Wednesday with Ramzan Kadyrov, the former militant fighter who now heads Chechnya, in the latest in a series of visits by Western celebrities to the volatile Russian republic.

“The famous American actor, film producer, writer, director and martial arts expert (seventh dan aikido) Steven Seagal visited our republic today,” Chechen leader Kadyrov wrote on Instagram, in a virtual copy of the Russian-language Wikipedia description of the ponytailed actor. “I invited him to my residence. We had a talk.”

“I told him that I watch his films, and I like them a lot,” said Kadyrov, who has denied frequent allegations of human rights abuses, including torture, as well as accusations that he has fostered a cult of personality in the republic.

“Nobility. Willpower. Honor. Qualities characteristic of Chechens. So we can say he is almost a Chechen!”

Seagal, star of the movies Above the Law, Under Siege, Fire Down Below and the short beer commercial Sheep Impact, made headlines in March when he joined Russian President Vladimir Putin at the opening of a martial arts center in Moscow.

Kadyrov also met with the French actor Gerard Depardieu and British actress Elizabeth Hurley on Tuesday. The two actors are set to star in a “crime thriller” currently being filmed in Moscow and the Chechen capital Grozny, which has been extensively rebuilt after being razed to the ground in two separatist wars in the 1990s.

Depardieu, who was recently given a Russian passport and an apartment in Grozny after publicly criticizing the tax regime in his native France, will play a man whose son is killed and who comes to Russia to avenge him, meeting up with an old flame (played by Hurley) in Moscow and a Chechen friend along the way.

Reports also said Depardieu is set to star in a film about Kadyrov’s father, Akhmad Kadyrov, the first president of Chechnya, who was killed in a bomb attack in Grozny in 2004.

Depardieu first visited Grozny last October for a gala concert on Kadyrov's 36th birthday, when he shouted: “Glory to Chechnya! Glory to Kadyrov!"