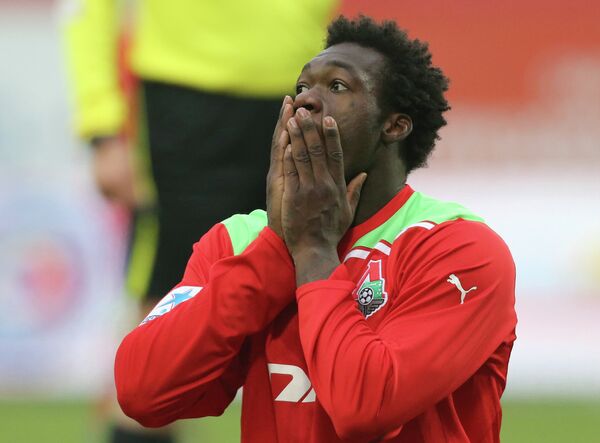 “I try not to notice these things, not to react in any way,” said the 24-year-old Ecuadorian. “It’s not easy because you are agitated during the game and the smallest thing can throw you off the balance, but I try so it doesn’t bug me.”

Caicedo is completing his second season in Russian football after joining Lokomotiv from Manchester City in 2011, and has scored 18 times in all competitions since.

The forward is already accustomed to ingrained xenophobia in the Russian game.

“Yes, I often encountered racism, especially when the team is not playing very well or during away matches,” Caicedo said.

But he added: “I think the opponents’ fans always demonstrate racism towards any player, and not only black, but white as well.”

Lokomotiv was plunged into scandal in March 2012, when a fan threw a banana at the Anzhi Makhachkala defender Christopher Samba at the team's stadium in northwest Moscow.

Earlier this season, Zenit St. Petersburg came under attack after their main fan club published a manifesto calling for an outright ban on the club signing black or gay players.

Officials are keen to eliminate the problem ahead of the 2018 World Cup, when Russia will host the event for the first time.