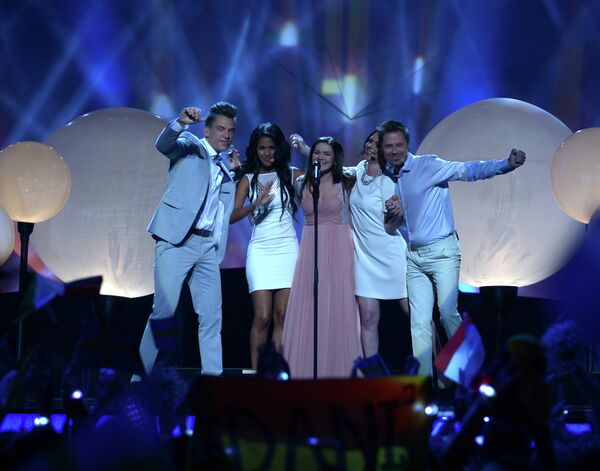 © RIA Novosti . Valeriy Melnikov
/
Go to the mediabank
Subscribe
International
India
Africa
Russian Foreign Minister Sergei Lavrov condemned the disappearance of votes awarded by Azerbaijan to Russian singer Dina Garipova at the recent Eurovision Song Contest as “an outrageous action,” and vowed on Tuesday that Russia would respond to the incident.

MOSCOW, May 21 (RIA Novosti) – Russian Foreign Minister Sergei Lavrov condemned the disappearance of votes awarded by Azerbaijan to Russian singer Dina Garipova at the recent Eurovision Song Contest as “an outrageous action,” and vowed on Tuesday that Russia would respond to the incident.

“We can’t be happy with the fact that ten points were stolen from our participant, primarily in terms of how this event is organized,” Lavrov said at a joint news conference in Moscow with his Azerbaijani counterpart, Elmar Mammadyarov.

“We have agreed with Elmar Mammadyarov that…we will discuss joint measures to ensure that this outrageous action will not go unanswered,” Lavrov added.

Garipova, 22, finished in fifth place at the Eurovision finals in Malmo, Sweden, on Saturday with a total of 174 points. She did not receive a single point in the final televised count of Azerbaijan's vote, while Russia gave the maximum 12 points to Azerbaijan's Farid Mammadov, who came second overall.

The Azerbaijan authorities have questioned the vote tally, claiming votes for Russia were apparently “lost.”

An investigation into possible fraud was underway, he added.

The European Broadcasting Union (EBU), the organizer of the Eurovision contest, on Tuesday rejected claims of the faulty count of Azerbaijan’s votes.

“The combination of televotes and jury votes, each bearing a 50% influence on the outcome, did not result in a top 10 position for Russia in the overall result from Azerbaijan,” EBU spokesman Jarmo Siim told RIA Novosti.

“Therefore, Azerbaijan awarded Russia no points – a result confirmed by a notary onsite, by our voting partner Digame and by an independent observer from PwC,” he said.

Siim added that any form of political pressure on professional juries “will be duly dealt with.”

Garipova, the winner of last year’s popular "Voice" television show in Russia, was 17 points behind fourth-placed Margaret Berger of Norway at Eurovision, so the extra 10 points from Azerbaijan would not have made any difference to the overall result.

Success at the pan-European song contest, however, has become a matter of national pride for millions of Russians in the past decade.

In 2008, Russian pop star Dima Bilan brought Russia the country’s only victory at Eurovision with "Believe."

His success was heralded by Russia’s state-run media as a sign the country was "finally making a return to Europe and reclaiming its superpower status in politics and culture, including popular music."