Putin Calls on Shipbuilder to Speed Up Naval Deliveries 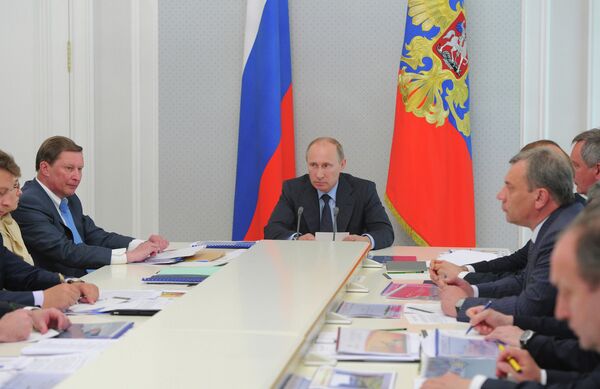 Russian President Vladimir Putin criticized the United Shipbuilding Corporation (USC) on Tuesday for delays in delivery of warships to the Russian Navy and demanded the shipbuilders improve efficiency.

SOCHI, May 21 (RIA Novosti) – Russian President Vladimir Putin criticized the United Shipbuilding Corporation (USC) on Tuesday for delays in delivery of warships to the Russian Navy and demanded the shipbuilders improve efficiency.

“Problems still remain with deadlines and the quality of implementation of orders, including defense projects. In particular, the construction of a number of nuclear submarines and surface ships and their delivery to the navy has been unjustifiably delayed," Putin said at a meeting with USC officials.

The president called on Russian shipbuilders to accelerate the delivery of ships to the customer without impairing their quality.

“The corporation must work smoothly, producing warships. This is one of the key tasks facing the USC's new management," Putin said.

Putin announced at the meeting that Vladimir Shmakov, first deputy CEO of tank manufacturer Uralvagonzavod, has been appointed the new USC head.

The president ordered USC's management to submit a report by October 15 on measures to improve the situation in the industry.

Russian Industry and Trade Minister Denis Manturov confirmed after the meeting that the USC had failed to keep with the schedule on about 30 percent of contracts with the Defense Ministry.

He said that the USC will hire foreign sub-contractors to help the company fulfill the delayed contracts.

United Shipbuilding Corporation, established in 2007, is Russia’s largest shipbuilding and ship repair company. It comprises nine design bureaus and 39 shipyards. USC currently accounts for 70 percent of the domestic shipbuilding industry, according to its website. The corporation is wholly owned by the state.

The Russian Navy is expected to receive 24 submarines and 54 warships of various classes by 2020, according to the Defense Ministry.