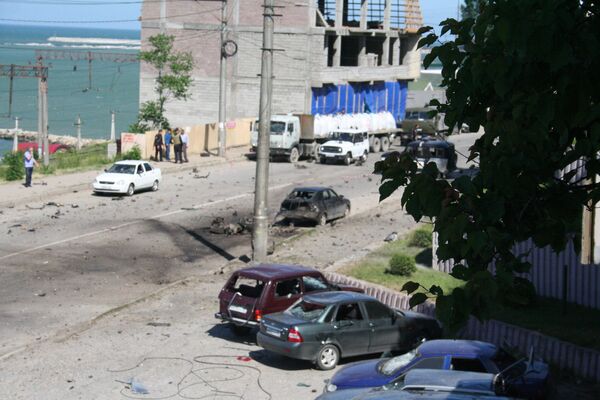 MAKHACHKALA, May 20 (RIA Novosti) - Four people were killed and almost 40 wounded by twin car bomb blasts in Makhachkala, the capital of Russia's republic of Dagestan on Monday, the Russian Health Ministry said.

“A total of 39 people are casualties as a result of the blasts, including four people who were killed at the scene,” the ministry said in a statement. “Currently, 35 people remain in hospitals, including a child.”

The Dagestan Interior Ministry initially said two policemen and a Bailiff Service employee were killed, and over 40 injured. A three-year-old child was among those reported injured, local Health Ministry officials told RIA Novosti earlier in the day.

The blasts, in  two cars laden with explosives left near the Bailiff Service building, took place some 15 minutes apart on Monday afternoon. The first blast caused no deaths, but the second occurred after law enforcers began examining the scene of the first explosion.

The local Investigative Committee said the power of the second blast equaled between 40 and 50 kilograms of TNT, adding the bombs could have been triggered remotely.

The blasts caused panic in the Bailiff Service building, according to an eyewitness.

“We were working as usual, at our desks. Panic broke out when we heard two explosions,” said Magomed Buttayev, a Bailiff Service press officer.

A Russian Emergencies Ministry Il-76 aircraft set off from Ramenskoye airfield near Moscow on Monday night carrying doctors, psychologists and medical equipment to the city. It will take some of the wounded to Moscow for medical treatment.

No group has yet claimed responsibility for the blasts.

Meanwhile, Moscow Region police said they had shot dead two suspected militants and arrested another on Monday after a siege in the town of Orekhovo-Zuyevo. The three suspects, who are Russian citizens, had been trained in the Afghanistan-Pakistan border area, the National Antiterrorism Committee said.

An Islamist insurgency, once confined largely to the republic of Chechnya, has spread across the North Caucasus in recent years. Attacks on security forces, police and civilians are reported regularly in the neighboring republics of Dagestan, Ingushetia and Kabardino-Balkaria.

(Changes headline, lead, recasts throughout, updates on the number of killed and wounded)