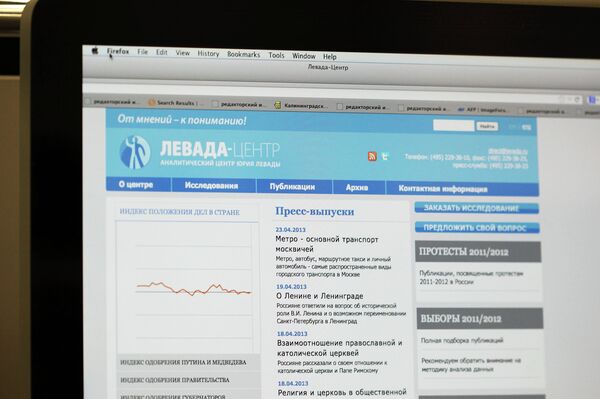 © RIA Novosti
Subscribe
A respected independent Russian pollster may have to close after receiving official notice from prosecutors that they expect the organization to register as a “foreign agent” under a controversial new law, it said on Monday.

MOSCOW, May 20 (RIA Novosti) - A respected independent Russian pollster may have to close after receiving official notice from prosecutors that they expect the organization to register as a “foreign agent” under a controversial new law, it said on Monday.

Two weeks ago, the Izvestia daily reported that pollster Levada Center had been asked to register as a foreign agent, but its director Lev Gudkov said at the time he had received no official notice.

In a statement on its website on Monday, the Center said prosecutors had suggested that publication of its surveys “influences public opinion and therefore does not constitute research but political activity” which requires it to register as “a foreign agent.”

Gudkov said the Center’s research projects, whether commissioned or undertaken at its own behest, have nothing to do with “political activity.”

The notice will force the center “to terminate its activity as an independent sociological research organization systematically conducting public opinion polls in Russia,” Gudkov added.

“By interpreting analytical materials and publication of the results of sociological surveys and commentaries by the Center’s experts as ‘political activity’ the prosecutor’s office, on the one hand, effectively confronts our organization with possible sanctions, and on the other, erodes its authority and business reputation,” Levada Center said.

The prosecutors' order not only carries the threat of possible administrative action against the Center’s staff, and even its liquidation, but also has possible implications for its partners and clients, Gudkov warned.

“What is at issue is the freedom of research activity and the dissemination of the results of surveys,” he continued, adding that the Centers is a nonprofit organization which spends the money it makes on various research or humanitarian projects under its statute.

Gudkov said payments from foreign organizations for the surveys they commission account for an insignificant proportion of its total budget, between 1.5 percent and 3 percent, and his organization does not receive state funding at federal or local level.

The most appropriate reaction would be to challenge the prosecutors’ warning in court as well as to contest the Foreign Agents Act as being “contrary to the Russian Constitution and other laws of the Russian Federation,” Gudkov said.

However, even a favorable judicial ruling would make no difference to the current situation, which “makes it impossible to continue working as an independent research institution,” the Levada director said.

Levada Center is currently consulting its lawyers and other experts to find a possible way out of the situation, he said.

Another pollster, the All-Russia Center for the Study of Public Opinion on Social and Economic Questions (VTsIOM), has received a similar warning from prosecutors, Gazeta.ru reported on Monday.

VTsIOM director Valery Fyodorov, in an interview with Gazeta. Ru, confirmed a warning had been received but declined to comment on the situation at this stage.

The new law has also subsequently been applied to NGOs involved in apparently non-political activity such as wildlife conservation and public health issues.

The Russian government insists it was necessary to prevent foreign meddling in the political system.