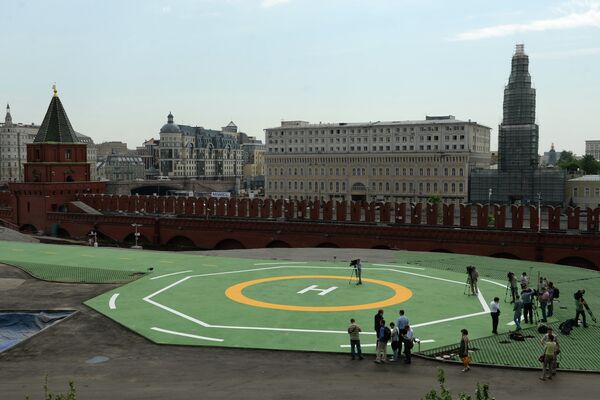 “About 200 million rubles were spent to finance all construction stages, including land survey works, modeling and landscaping, Kozhin told reporters on Friday.

“This pad will be used primarily by the Russian president,” he said, adding that it could occasionally receive helicopters flying high-ranking foreign guests from the Vnukovo airport.

The use of the helipad, located in the Kremlin's Tainitsky Garden close to exterior walls, will not harm the host of historical monuments that make part of the Kremlin’s architectural ensemble, Kozhin said.

Putin announced last year that he would use a helicopter to get to work and work more from his residence outside Moscow after Muscovites complained that his motorcade was causing traffic jams in the capital already plagued by heavy traffic.

Prime Minister Dmitry Medvedev began commuting by helicopter to his office at the government headquarters downtown Moscow a few months ago for the same reason.

Putin’s press secretary Dmitry Peskov said on Thursday that the Russian president will use modified Mil Mi-8MTV-1 transport helicopter, although he did not specify how often Putin will commute by air.

The Rossiya airline, which caters to the Russian leadership, operates two Augusta-Westland AW-139 helicopters in addition to Mi-8s.