Most Russians Against Promotion of Homosexuality - Survey 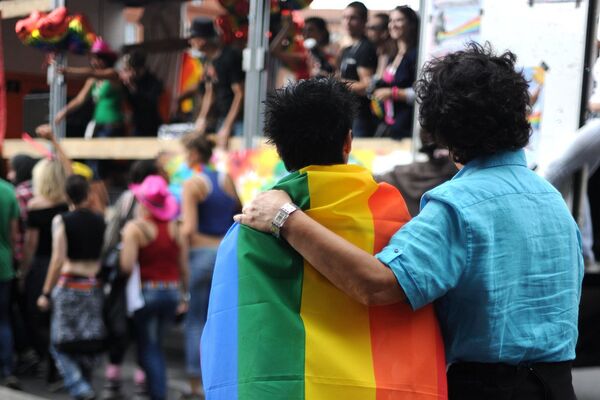 More than 70 percent of Russians are against the justification and public display of homosexual relations while only 12 percent are in favor, according to a survey by the Levada Center independent pollster published on Friday.

MOSCOW, May 17 (RIA Novosti) - More than 70 percent of Russians are against the justification and public display of homosexual relations while only 12 percent are in favor, according to a survey by the Levada Center independent pollster published on Friday.

The results of the opinion poll, published to coincide with the International Day Against Homophobia, Biphobia and Transphobia, show only 12 percent of Russians consider homosexuality as normal sexual behavior fully equal to heterosexual relations. Thirty five percent are convinced that same-sex relations are a disease or a result of a psychological trauma, while 43 percent consider it a bad habit, the poll found.

A total of 39 percent of respondents said gays should enjoy the same rights as other Russians (seven percent definitely in favor and 32 percent “mostly agree”), while 47 percent are against (19 percent disagree completely, while 28 percent “mostly disagree”).

The survey was conducted on April 19-22 among 1,600 respondents from 45 Russian regions. The margin of error is below 3.4 percent.

Homosexuality was only decriminalized in Russia in 1993, and anti-gay sentiment remains strong in society, including among Russia's political establishment.

The Russian authorities have never sanctioned a gay pride rally, though LGBT activists have been applying for permits in Moscow since 2006. In 2012, Moscow’s highest court upheld a municipal government ban on gay pride parades for the next 100 years.

A ban on spreading “gay propaganda” among minors, currently under review in the Russian legislature, envisages fines of 4,000 to 500,000 rubles ($130 to $16,500) for individuals and organizations promoting among minors of the benefits of same-sex relations. Local legislatures in several Russian regions, including St. Petersburg and Novosibirsk, have already passed a similar law.

A rally to mark the International Day Against Homophobia, Biphobia and Transphobia was held in Russia’s second largest city of St. Petersburg on Friday. It was attended by Vitaly Milonov, a St. Petersburg Сity Сouncil deputy and the author of the city’s "anti-homosexual propaganda” bill.

“We won’t stand the dictatorship of liberal values. We came here to stand in support of traditional family values,” said Milonov, who appeared at the rally surrounded by his aides, a group of Cossacks and people wearing military uniforms and identifying themselves as veterans of the Soviet war in Afghanistan and other military conflicts.

The lawmaker was also accompanied by a group of people holding icons and chanting prayers.