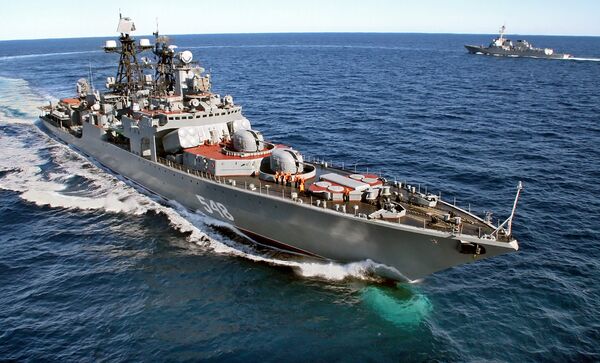 A group of warships from Russia’s Pacific Fleet entered the Mediterranean waters for the first time in decades, a fleet spokesman said on Thursday

VLADIVOSTOK, May 16 (RIA Novosti) - A group of warships from Russia’s Pacific Fleet entered the Mediterranean waters for the first time in decades, a fleet spokesman said on Thursday

“The task force has successfully passed through the Suez Channel and entered the Mediterranean. It is the first time in decades that Pacific Fleet warships enter this region,” Capt. First Rank Roman Martov said.

The vessels are now en route to Cyprus and are scheduled to make a port call in Limassol.

The group, including the destroyer Admiral Panteleyev, the amphibious warfare ships Peresvet and Admiral Nevelskoi, the tanker Pechenga and the salvage/rescue tug Fotiy Krylov left the port of Vladivostok on March 19 to join Russia’s Mediterranean task force.

The task force currently includes the large anti-submarine ship Severomorsk, the frigate Yaroslav Mudry, the salvage/rescue tugs Altai and SB-921 and the tanker Lena from the Northern and Baltic Fleets, as well as the Ropucha-II Class landing ship Azov from the Black Sea Fleet.

A senior Defense Ministry official said the Mediterranean task force's command and control agencies will be based either in Novorossiysk, Russia, or in Sevastopol, Ukraine.