Russia Hammered by US in Hockey Worlds Quarters 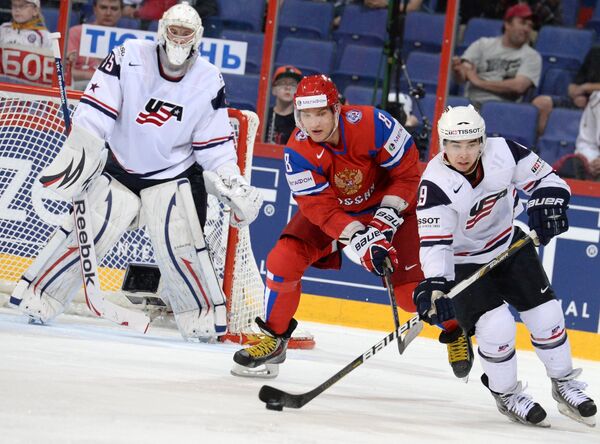 Russia collapsed in the world hockey championship quarterfinal on Thursday as the United States effortlessly poured in goals to embarrass the defending champions with an 8-3 victory in Helsinki.

HELSINKI, May 16 (R-Sport) – Russia collapsed in the world hockey championship quarterfinal on Thursday as the United States effortlessly poured in goals to embarrass the defending champions with an 8-3 victory in Helsinki.

Paul Stastny and T.J. Oshie scored mid-way through the first period to give the Americans a 2-0 lead and Stastny, Ryan Carter, Jacob Trouba and David Moss netted four more in the third as the US buried their long-time rivals.

The eight goals were the most Russia has allowed at the world championship, dating back to the Soviet Union.

“What happened? Who knows what happened,” said Russian wing Ilya Kovalchuk, who scored eight goals in the tournament but was held off the score sheet on Thursday.

“I don’t know where all the mistakes came from. We should have played with more confidence.”

Indeed, it was not supposed to end this way for the Russians, who had been looking to fortify their supremacy over the hockey world ahead of the Sochi 2014 Olympics. Zinetula Bilyaletdinov’s team, however, was plagued throughout the tournament by shaky goaltending and a disconcerting lack of urgency, exhibited in earlier losses against Helsinki-pool leader Finland and the lowly French.

On Thursday, it was the normally stingy Russian defense – they had allowed only 14 goals in seven games – that could not contain the Americans, who had scored 24 goals, fourth most in the tournament.

Midway through the first period, Stastny beat defenseman Ilya Nikulin to the net, receiving a nifty behind-the-net assist from Craig Smith that he fired past Ilya Bryzgalov, the Russian goaltender.

Less than a minute later, Tim Stapleton intercepted a Russian pass and slipped it ahead to T.J. Oshie, who beat Bryzgalov glove side to give the Americans a 2-0 lead.

A goal from Alexander Svitov brought the score to within one at 15:30 of the first, but the Americans owned the second period. Carter fed Nathan Thompson for a one-timer less than six minutes into the frame, beating Bryzgalov between the legs.

Alex Galchenyuk, an ethnic Russian who was born in the U.S., took another Smith assist with three minutes left, faked Bryzgalov and jabbed the puck home for his first goal of the tournament.

Like Kovalchuk, Bryzgalov, who was pulled after the following shift, expressed disbelief over Russia’s poor play. Bryzgalov had made 19 saves in a 5-3 win over the US on May 7.

“I do not know what to say,” the Philadelphia Flyers goalie said. “I want to apologize to our fans, though of course, we can’t be excused.”

His replacement, Semyon Varlamov, hardly fared better by giving up four goals – including one shorthanded to Carter – on 10 shots in the third period.

The US team, which scored on nearly 13 percent of their chances in the championship, took 31 shots in the game. Kovalchuk, for one, absolved Bryzgalov and Varlamov of blame, explaining the US set up effective screens in front of the net.

“They didn’t see a thing, at least one player stood in front of them all the time,” he said.

Regardless, their disappointing performance Thursday likely will raise questions about the coaches’ decision to leave Columbus Blue Jackets star goaltender Sergei Bobrovsky off the roster.

Meanwhile, American goaltender John Gibson, who had been nearly unbeatable heading into the quarterfinals, stopping 61 of 62 shots in two starts, got the call over starter Ben Bishop and made 31 saves against a Russian team that had scored 29 goals in the seven-game preliminary round, tied for best in the tournament.

Gibson, 19, staved off a small rally early in the third period when Alexander Ovechkin, who joined the team on Wednesday after his Washington Capitals were eliminated from the NHL playoffs, and Alexander Perezhogin cut the Americans’ lead to 5-3.

The US next faces either Switzerland or the Czech Republic in the semifinals.