CIA Agent Was Nabbed by Russian He Sought to Recruit - FSB 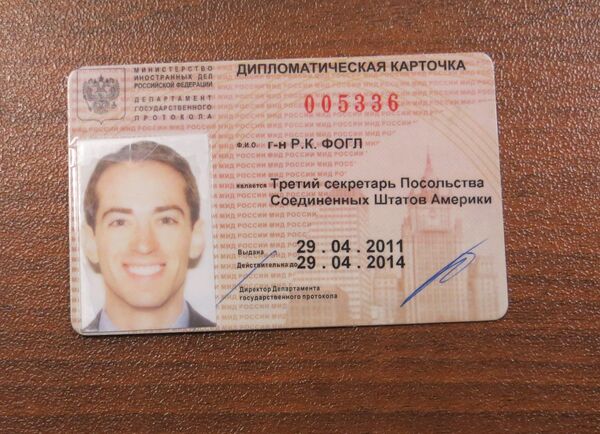 The alleged CIA operative who was attempting to recruit a Russian security services officer was detained by that officer himself, a Federal Security Service (FSB) representative told RIA Novosti on Thursday.

MOSCOW, May 16 (RIA Novosti) – The alleged CIA operative who was attempting to recruit a Russian security services officer was detained by that officer himself, a Federal Security Service (FSB) representative told RIA Novosti on Thursday.

“The man behaved like an officer worthy of his name, detaining the recruiter and handing him over to counterintelligence authorities,” the representative said.

“He will continue to serve; there is no threat to his career.”

On Wednesday, Russia lodged an official protest with the US ambassador over Ryan Christopher Fogle, an embassy officer who Russia says is an undercover CIA operative.

On Tuesday, the FSB said that Fogle, a US diplomat working as a third secretary in the embassy’s political department, had been detained on the night of May 13 as he attempted to recruit an officer from one of Russia's special services. Later on Tuesday the diplomat was declared persona non grata.

Fogle will leave Russia within the next few days, a source with knowledge of the matter told RIA Novosti on Wednesday.

Russia and the United States "will try to avoid ratcheting up tension around the Ryan Fogle case, focusing instead on the positive aspects of their relations," the source added.

A man identified as an FSB officer told Russia’s Channel 1 TV on Wednesday that the CIA has long been working hard to infiltrate Russian security and intelligence services.

“Over the past two years we have observed persistent attempts by the CIA to recruit employees of Russian law enforcement and security agencies,” the man said, with his face concealed and his voice altered to protect his identity, adding that in January a CIA officer had been expelled from Russia.

“We asked our American colleagues to discontinue such disturbing practices with regard to Russian citizens. However, our requests were ignored.”

In the interview shown on the state-owned Channel 1, the FSB officer said that Russian counterintelligence was aware from the moment Fogle arrived in Moscow in the spring of 2011 that he was a career CIA officer, and had consequently kept tabs on him.

Fogle’s attempt to recruit a Russian citizen on Monday was not his first espionage mission, and it was not the first time he had used disguise to attempt to evade surveillance, the FSB officer said.

The US Embassy in Moscow has not commented on the Fogle case yet, or on the FSB’s claim that a CIA officer was expelled in January. The State Department responded briefly to the reports about Fogle by confirming that an officer had been detained and released by Russian officials.