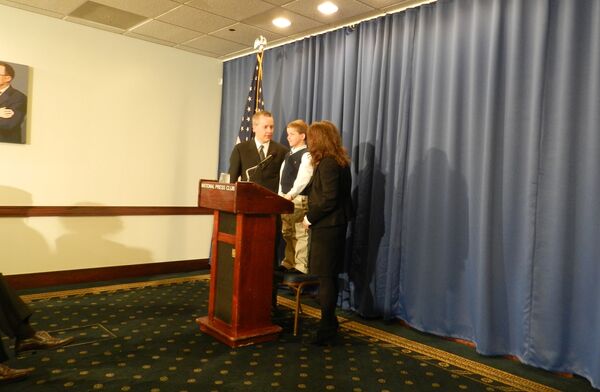 © Photo : Maria Young
Subscribe
Standing on a chair so he can see over the podium, 8-year-old Jack Thomas peers at a sea of reporters, cameras and microphones at a news conference, and – with a little prompting from his dad – says what he came all the way from Minnesota to say.

WASHINGTON, May 14 (By Maria Young for RIA Novosti) – Standing on a chair so he can see over the podium, 8-year-old Jack Thomas peers at a sea of reporters, cameras and microphones at a news conference, and – with a little prompting from his dad – says what he came all the way from Minnesota to say.

“I’m from Russia. I have a younger brother that’s in Russia too. I would like him to be home,” he says simply. 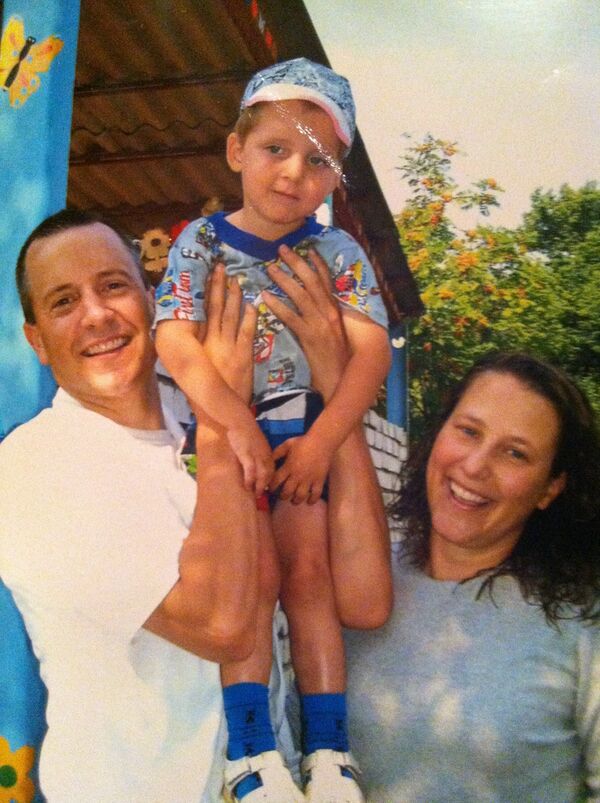 John and Rachel Thomas met their son Jack in June 2008, and adopted him in December of that year.
© Photo : Courtesy: John Thomas Family

Except that there is nothing simple about the adoption standoff between the United States and Russia. Jack’s adoptive parents – along with other families trying to adopt from Russia – came to Washington Tuesday to offer what they hope is a resolution.

They are part of an estimated 230 US families who had been matched with 300 Russian children – children they have met, bonded with, and were in the process of adopting when the ban on US adoptions in Russia went into effect Jan. 1.

The trip to Washington to push their proposed adoption ban resolution is just the latest move in an ongoing effort to end the standoff.

The families have sent a small group to meet with Russia’s US Ambassador Sergey Kislyak. They have pleaded with members of Congress. They appealed to US President Barack Obama in an open letter Monday in The Hill, a Capitol Hill newspaper that covers congressional and governmental issues. And they are pushing for the issue to be on the agenda when Obama and Russian President Vladimir Putin meet at the G8 summit in Northern Ireland in June.

Tuesday, tired of waiting for the two governments to find a solution, the families unveiled their own set of proposals which they hope will form the basis for a resolution that has proven elusive so far.

“We all realized that as families we needed to come together in order to try to find a solution to this impasse,” said Sabrina Dickenson Turri, a spokeswoman for the families who unveiled details of the plan and said it was designed to address specific concerns expressed by Russian officials.

The plan calls for:

• Greater access to adopted children for the Russian Federation, through scheduled Consular visits, notification if a child welfare case is opened, and access to medical records in such a case

Adopted by a mother who was raised in foster care, Turri has already adopted a son from Russia and is in the process of adopting a 1-year-old daughter with special needs. In recent months, she has become well-versed in adoption politics.

“Until we can address some of these larger global issues we are not going to be able to get our children home,” Turri said, and added, her voicing catching, “We need to rise above the politics, prioritize the children and don’t let our children be abandoned again due to politics.”

The adoption ban came just days after Obama signed the controversial Magnitsky Act – a law banning US visas and freezing US assets for Russian officials deemed by Washington to have violated human rights.

The ban is also known as the Dima Yakovlev Law, named after a Russian orphan who was adopted by parents in Virginia and died of heat stroke after being left in a hot car for nine hours. It underscores the concerns Russia has about the welfare of children after they are adopted in the US.

Of the roughly 60,000 Russian children adopted by US parents since the collapse of the Soviet Union, at least 20 have died in the care of their adoptive parents. Russian officials suggest many more adopted children have been neglected or abused, but say finding records and documentation to support those claims has been difficult.

“These families here are incredibly motivated and we invite the Russian Federation to use these families as a pilot program and put the spotlight on us,” said Garrett Boehm, an attorney from Chicago who has a 6-year-old son from Russia and is trying along with his wife to adopt a young daughter from there as well.

“We’ll take the pressure and show that we are reliable and the Russian Federation can have confidence that these children will be cared for reliably,” he said in an interview with RIA Novosti.

Jack Thomas’ parents, John and Rachel, have been trying to adopt Jack’s biological brother from Russia, a little boy they call Teddy who will be five in June – ever since they learned of his existence, when they finalized Jack’s adoption in December 2009.

“The bottom line is, these guys are brothers, and no matter what the law says, there will be a day when my son will meet his brother,” said John Thomas in an interview with RIA Novosti.

“He’s his brother’s keeper,” he added.