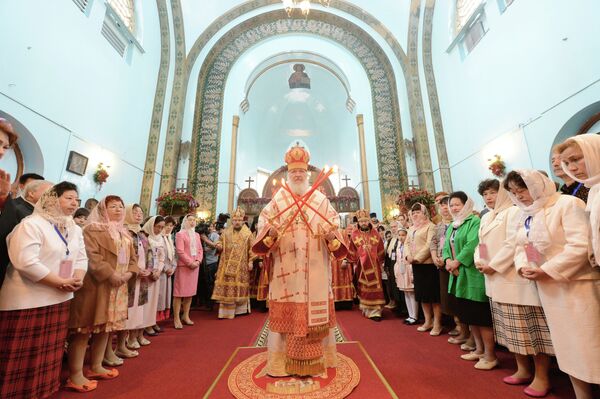 © RIA Novosti . Sergey Piatakov
/
Go to the photo bank
Subscribe
The leader of Russia’s Orthodox Church conducted a landmark service in the Chinese city of Harbin on Tuesday, the first in several decades.

HARBIN, May 14 (RIA Novosti) – The leader of Russia’s Orthodox Church conducted a landmark service in the Chinese city of Harbin on Tuesday, the first in several decades.

Patriarch Kirill, accompanied by a large Orthodox clergy delegation, sang a hymn celebrating Easter at a 1930-built cathedral in the city.

Kirill’s visit to China, which began last week, is the first by a leader of the Russian Orthodox Church.

Harbin, in northeast China, founded by imperial Russia in 1898, became a refuge for White Russian émigrés fleeing their homeland after their side lost the civil war in the 1920s. Harbin was also occupied by Soviet forces at the end of World War II.

Since Communist rule in China began in 1949, almost all of the 20 Orthodox churches were destroyed or put to other purposes. Orthodox ceremonies are not held in any of the few remaining.

The patriarch also visited Harbin's St. Sofia Cathedral, which was formerly used as a warehouse for a long period and currently houses a Harbin history museum.