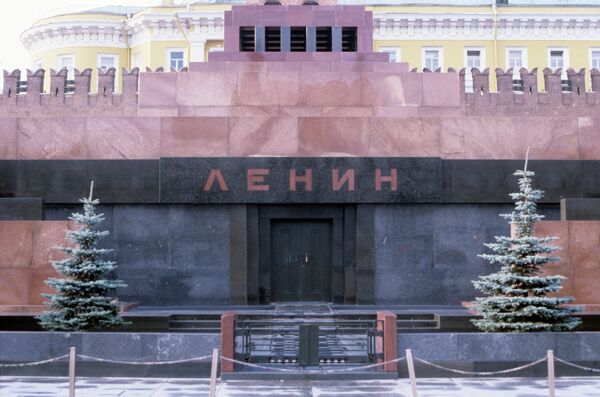 MOSCOW, May 15 (RIA Novosti) – The mausoleum holding the remains of Russian Communist leader Vladimir Lenin in Moscow’s Red Square will reopen on Wednesday after repairs that fixed the “sinking” foundation and restored the original lighting, the Federal Guards Service (FGS) said.

The mausoleum was closed to public in September 2012 as experts had been concerned about the leaking roof and unstable foundation of Moscow’s top tourist attraction. The Lenin’s Tomb has not undergone major repairs in over 80 years. 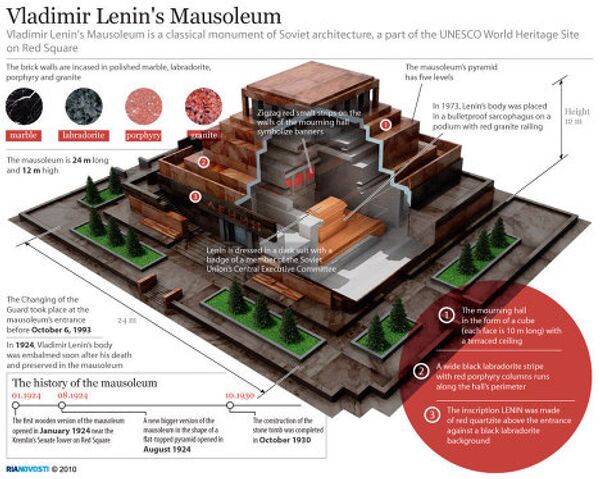 “All the renovation work has been done by the end of April, but the opening was postponed until after the Victory Day parade on Red Square [on May 9],” FGS spokesman Sergei Devyatov told RIA Novosti on Tuesday.

According to the Devyatov, the mausoleum’s foundation has been reinforced with 350 piles around the perimeter of the monolith block.

“The repairs also included water-proofing of the upper level of the mausoleum and restoration of the original lighting of the upper-level colonnade,” the official said.

During the repairs, Lenin’s body stayed enclosed in its normal sarcophagus inside the building, which was covered with a giant inflatable dome to ensure protection from potential damage.

Lenin died on January 21, 1924, but despite his stated wish his corpse was embalmed and placed in a specially built mausoleum on Moscow's Red Square. Over the years of Soviet rule, crowds of Soviet citizens and foreign tourists and officials visited the shrine.

However, proposals that Lenin's mummy should be removed from the heart of Moscow arose immediately after the dissolution of the Soviet Union in 1991.

According to most recent public opinion polls, almost half of Russians believe that Lenin’s body should be removed from the mausoleum and buried at a cemetery.

The discussion seems set to continue for some time as the opinion of Russia's top leadership remains non-committal.

Russian President Vladimir Putin said in 2010 that said in 2010 that the time when the Russian people decide on the fate of Lenin's mummy is still to come, adding that history shows a strong dislike for haste and disturbances.