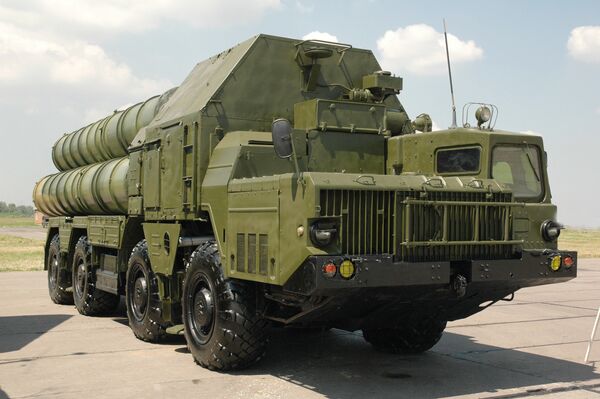 © RIA Novosti . Yury Shipilov
/
Go to the mediabank
Subscribe
International
India
Africa
If fresh media reports are true, Russia, Syria’s longtime supplier of military equipment, may soon provide Damascus – or already has – with advanced S-300 air defense systems, tipping the balance in the devastating 26-month conflict in the Middle Eastern country. But the “if” is a big one.

MOSCOW, May 14 (Alexey Eremenko, RIA Novosti) – If fresh media reports are true, Russia, Syria’s longtime supplier of military equipment, may soon provide Damascus – or already has – with advanced S-300 air defense systems, tipping the balance in the devastating 26-month conflict in the Middle Eastern country. But the “if” is a big one.

The missile batteries would give Syrian President Bashar al-Assad’s regime a powerful weapon against foreign air strikes – one of the options being bounced around as a form of international intervention – and could fracture the fragile accord on Syria reached last week between Moscow and Washington, which hope to get the warring sides to negotiate.

But verifiable information about the S-300 deal is desperately scant: Was there a deal at all? What did it cover? Has any part of it been implemented? For now, what we know about the S-300 saga, from its origins to its implications, has been based on disappearing documents, anonymous sources, rumors, approximations and misunderstandings. Here, RIA Novosti tries to unravel the mess and answer some of the big questions.

Technically, it’s all hearsay. The only solid piece of evidence was a 2011 annual report by S-300’s manufacturer, the Nizhny Novgorod Machine Building Plant, which mentioned a contract for the missile systems for Syria. The report has since vanished from the plant’s website, but was cited by the respected Vedomosti business daily at the time as saying that the contract was worth $105 million and that an unspecified number of S-300 systems were slated for delivery between 2012 and early 2013. 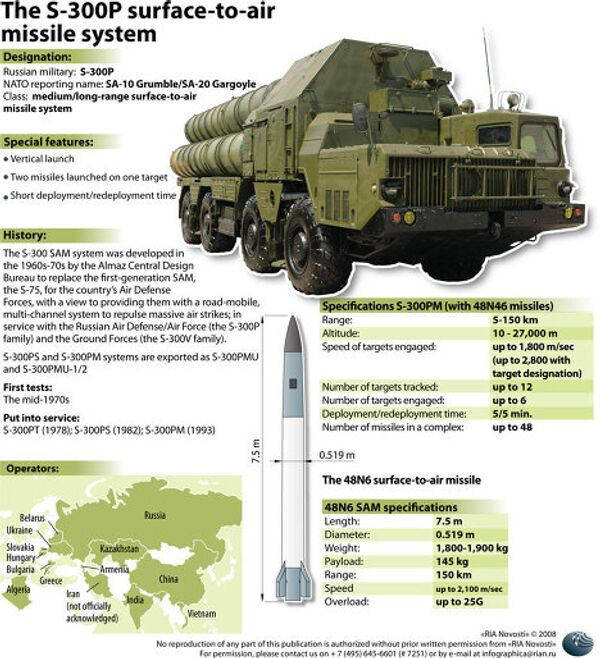 All other reports have been based on leaks by unnamed intelligence and diplomatic sources, including, most recently, in the prominent Russian daily Kommersant and the Wall Street Journal, which said last week that the deal includes four S-300 batteries and 144 missiles and has a price tag of $900 million, with deliveries to begin, possibly, by late summer. (One S-300 missile system is estimated by experts to cost some $115 million, plus $1 million or so per missile.)

Damascus has never commented on the deal, and neither has the Russian arms export monopoly Rosoboronexport. The Russian Foreign Ministry has repeatedly said Russia is following through on existing contracts to supply defensive weapons, including air defense systems, to Syria, but never says what precisely they are. The lack of clarity leaves room for wild guesses: Maybe the S-300 deal was never in the cards. Or maybe a number of complexes have already been shipped over the past two years, as some media reports alleged in December.

-    Who decides whether the deal goes through? Can the international community or any third parties affect the sale?

The deal is strictly between Moscow and Damascus – which is to say, it’s all in the hands of Russian President Vladimir Putin. International treaties on arms trade are few and far between, and tend to cover things like strategic weapons and cluster bombs, not air defense systems, however advanced they may be. Meanwhile, all attempts to ban arms sales to Syria via the UN Security Council have been blocked by Russia. Of course, there is behind-the-scenes haggling and arm-twisting, but that’s unofficial.

The S-300 systems have been modernized repeatedly to remain state-of-the-art airplane- and rocket-destruction machines. The S-300PMU2 Favorit can launch six missiles at once, each capable of destroying aircraft flying at several times the maximum speed of the F-16 and F-22 fighter jets – the staples of the Israeli and US air forces, respectively – as well as intercepting ballistic targets. They can be suppressed or sabotaged by ground troops, but it is a tricky task. All this is to say, that the risk and cost of air attacks against Syria would rise dramatically (more on that directly below).

Not the Syrian rebels – they have no aircraft. And though you can technically reprogram the S-300 to hit ground targets, that would be akin to hammering nails with a tablet computer, given the price of $700,000 to $1.2 million per missile. However, any attempts by foreign powers to enforce a no-fly zone over Syria, as was done in Libya in 2011, would end in what Igor Korotchenko, the editor of the Moscow-based National Defense magazine, described as “dozens of destroyed aircraft and coffins covered by star-spangled banners. Unacceptable.”

-    What’s the possible time frame? How long until Assad can shoot foreign fighter jets out of the sky?

The S-300 system deploys in five minutes – once it’s paid for, produced, tested, shipped, and manned by trained personnel. Some of this poses little problem: The Syrian government seems to have enough money in its pockets, and shipping from St. Petersburg to the Syrian port of Tartus takes about two weeks. That is, of course, provided the cargo does not get arrested in Finland, or the ship denied entry to European ports because its insurance was revoked – both true stories that happened to Russian ships reportedly carrying arms to Syria.

Still, it would likely take a while before Damascus actually gets any missiles. The Wall Street Journal claims – citing US sources citing Israeli sources – that the shipments may begin arriving by August, while the London-based, Arab-language Al-Quds Al-Arabi newspaper said they are already in Syria, though still under Russian supervision. However, according to Russian arms experts, the manufacturer is unlikely to have ready-to-ship S-300 systems lying on the shelves: Whatever leftovers there were from a deal with Iran, scrapped in 2010, were long ago snatched up by other customers such as Algeria, according to Ruslan Pukhov of the Center for Analysis of Strategy and Technologies, a for-profit research group in Moscow. This means the systems would need to be produced and test launches conducted, a job that would take about a year, Pukhov said. Furthermore, dozens or even hundreds of staff would have to be trained to operate the complicated machinery, which should take about six months. This would push Assad’s most optimistic deadline of owning fully operable S-300 complexes to November at best, with spring of 2014 being a more realistic estimate.

Updated with S-300's estimated cost and changing "missile complex" to "missile system" throughout.