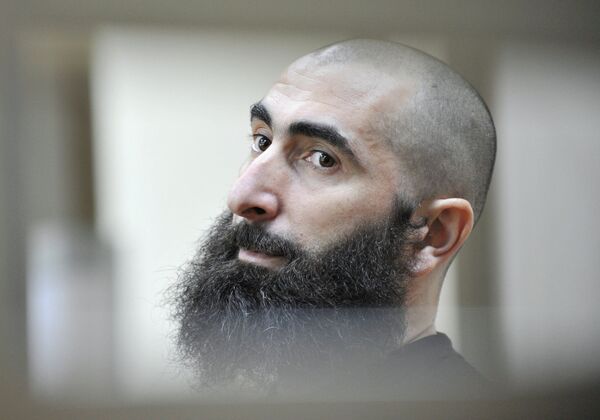 A former police officer who allegedly switched sides and joined North Caucasus militants to become one of their leaders went on trial in the southern Russian city of Rostov-on-Don on Monday.

ROSTOV-ON-DON, May 13 (RIA Novosti) – A former police officer who allegedly switched sides and joined North Caucasus militants to become one of their leaders went on trial in the southern Russian city of Rostov-on-Don on Monday.

Ali Taziyev, also known by his alias Magas, is charged with setting up an armed militant group, illegal arms trafficking, terrorism, inciting a rebellion and attempted murder of a law enforcement officer. Charges against him also include 24 counts of terrorism.

The trial, which is to feature evidence from more than 600 victims and over 400 eyewitnesses, began amid tough security measures at the military court on Monday. Taziyev, who allegedly became one of the top leaders of the Imarat Kavkaz militant group and second in command in that organization after terrorist leader Doku Umarov, pleaded not guilty to almost all of the charges.

“I plead guilty to [charges under Article] 208 [setting up an illegal armed group] and to [Article] 222 [illegal possession of arms]. I plead not guilty to the rest of the charges. I haven’t done any of that, and I gave no such orders,” he said.

Shortly after Taziyev’s arrest in North Ossetia in June 2010, FSB director Alexander Bortnikov described him as a “leader of the criminal underground,” responsible for hundreds of deaths in Ingushetia, including an attack by militants on police and government offices in Nazran in 2004 that killed 79 people.

The list of other crimes he is suspected of includes the bombing of a bus in the town of Nevinnomyssk in December 2007, the bombing of a police station in the Nazran district of Ingushetia in August 2009, and an attempt to assassinate Ingush President Yunus-Bek Yevkurov in June 2009.

In a 2004 article, The Moscow Times mentions Taziyev among police and security officers who greatly enhanced the destructive capabilities of North Caucasus militants by joining or assisting them.

Prosecutors believe that Taziyev joined North Caucasus militants at his own initiative in 1999 after being kidnapped by Chechen gunmen in fall 1998. Prior to that, he was a sergeant employed at the Ingush police’s Extradepartmental Protection department, providing private security services on a contractual basis.